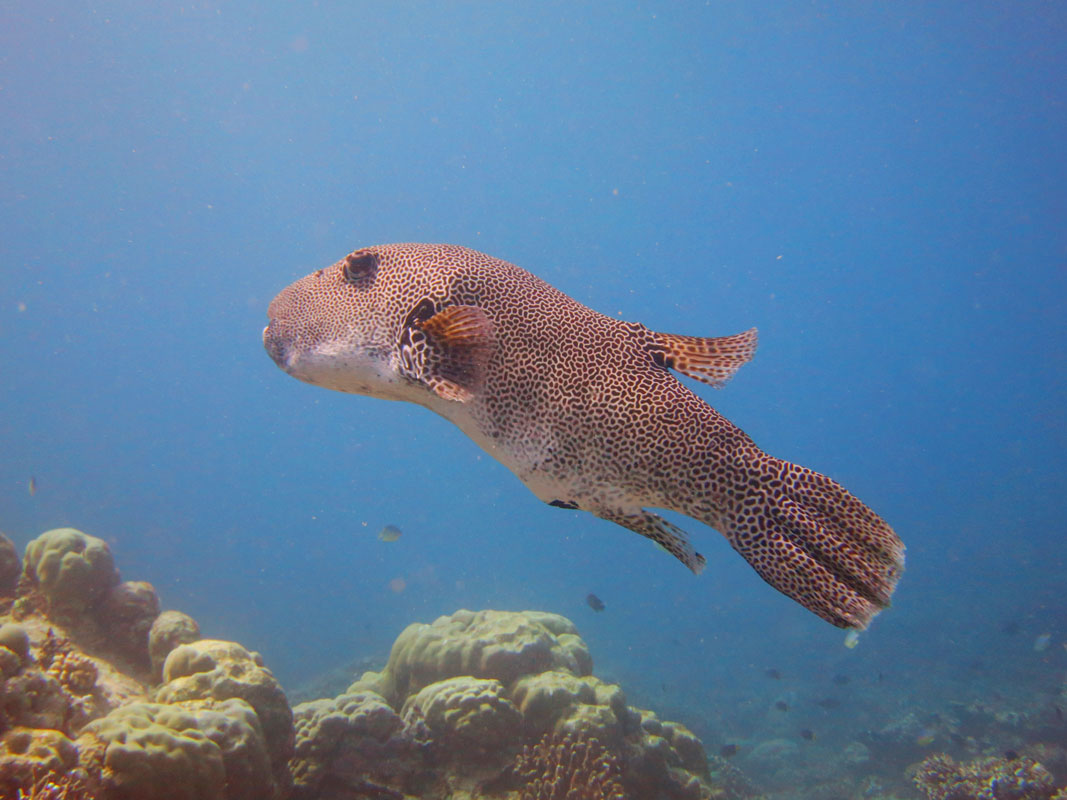 Think about sea animals that are able to transform themselves, change their shape or colour. How many can you name? Your list probably does not include the Puffer fish, but it should. This slow-moving, gentle and beautiful fish can change itself into a weapon and turn into one of the deadliest creatures in the world.

Let’s look at some interesting facts about this fish.

1. Diversity
There are more than 100 species of Puffer fish. They can be found in tropical waters all over the world, such as the Pacific Ocean and the Red Sea. Only 18 species have been recorded in the Maldives. They are mostly bottom fishes that live on either reefs or sand flats.

3. Scale-less
Puffer fish do not have scales. Their skin is thick and rough. Some species have spines on the skin, which offer additional protection against the predators. But they are more sensitive to water variations than other fish, and tend to be more at-risk for diseases.

4. Quick transformation
All Puffer fish share one characteristic, the ability to puff up, which is what gives them their name. They can puff up to two or three times their normal size. Because they are poor swimmers, they are more likely to get eaten by larger fish. When they are threatened, they can ingest huge amount of water, and air sometimes, which increases their body size and turn them into large ball-like creatures. This quick transformation scares predators and makes them look harder to eat.

6. Toxicity
Almost all species of Puffer fish contain a neurotoxin called tetrodotoxin that can be 1200 times stronger than cyanide. When they inflate, the toxin is released on their skin. This neurotoxin damages the nervous system, particularly blocking the communication channels between the brain and the body, paralysis occurs and the lungs and heart fail, and the animal or person dies within minutes. One Puffer fish contains enough toxins in its liver to kill 30 human adults. For this reason, Puffer fish are considered the second most poisonous creatures in the world.

7. Colouration
Puffer fish can be discretely or brightly colored. The body coloration is often related to the amount of toxin produced by the fish, brighter colors are often associated with large quantity of toxin in the fish.

8. Delicacy
In Japan, Puffer fish is a delicacy called fugu. Only chefs who have trained for three years or more can prepare it, since they have to remove the poisonous organs of the fish to avoid poisoning. Between 1996 and 2006, 44 fugu poisoning incidents were recorded in Japan.

9. Predators
Sharks are the only species immune to the Puffer fish's toxin. They can eat this toxic fish without any negative consequences.

10. Teeth
Puffer fish have four teeth, two at the top and two at the bottom, both fused to look like one large tooth, making Puffer fish seem like they have beaks. They use their teeth for opening mussels, clams and shellfish.
Their teeth always keep on growing, so they need to feed on hard shells to help organically trim the teeth and keep them short.