Our Marine Biologist at Coco Bodu Hithi, Carolina de la Hoz Schilling, gives us an insight into the lives of some of our most famous house reef residents.

Carolina studied General Biology in Austria, but has long been obsessed with the ocean and its inhabitants, especially sharks. She worked at a shark research station in the Bahamas and spent six months with the Shark Project in the Galapagos Islands. In Portugal, she worked as a naturalist and dolphin watching guide. Carolina is a certified Divemaster and enjoys spending her days in the water working with marine animals and sharing the beauty of the ocean with other people. 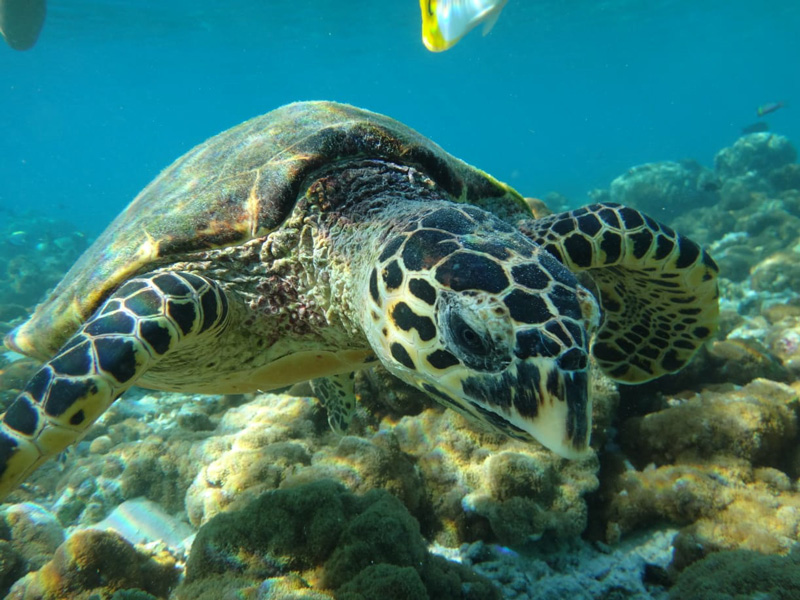 Coco Bodu Hithi is home to a large population of one of seven known species of sea turtle- the Hawksbill turtle (Eretmochelys imbricata). Like all sea turtles, hawksbill turtles are listed as endangered, or even critically endangered in most places, due to a population drop of about 80% in the last century. As hard as it is to imagine, this sombre fate is shared by many marine species around the globe.

There are many things to be afraid of out there when you are a sea turtle: you could fall victim to large, unselective commercial fishing nets or get entangled in ghost nets, which are discarded or broken pieces of net drifting through the ocean.

You may accidentally get hit by speedboats when floating at the surface to catch a breath, or you could end up a victim of illegal poaching of your shell or eggs. Large coastal development around beach areas prevents you from safely laying your eggs and hinders your babies from finding their way into the ocean.

Also, plastic really tastes horrible and can give you severe indigestion, or worse, damage your internal organs.

Warming temperatures can potentially influence the gender of your babies being born, as with some reptiles it is the temperature in which the eggs develop that ultimately determines the gender of the animal. We may be looking at a future of a sea ruled by female turtles... But who run the world? Girls! 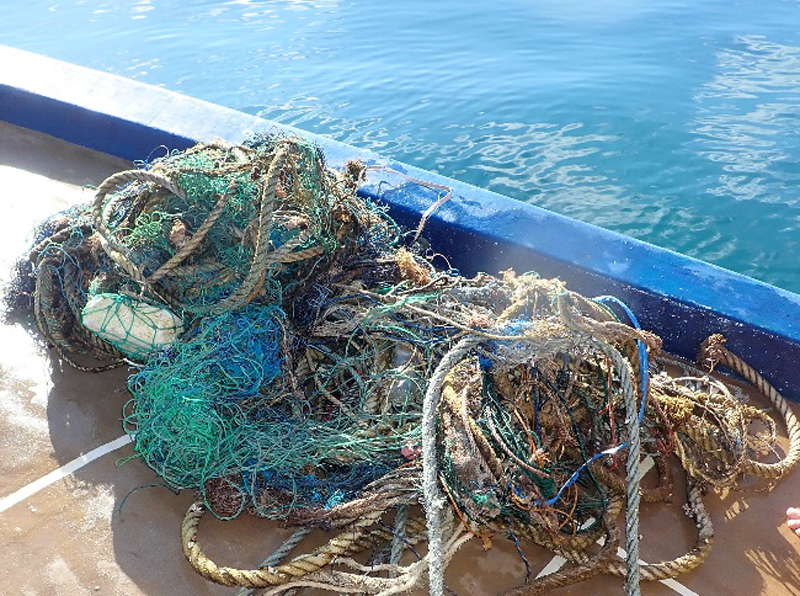 Ghost net found caught on corals, brought in by the strong currents – thankfully without any entangled animals

For all of these reasons and more, here at Coco Bodu Hithi we are very protective of our hawksbill turtles. They owe their name to the shape of their pointy, hawk-like beak which paired with a narrow head and a furious determination and stubbornness, can reach places within the cracks in the reef that other turtles can only dream of.

Unbothered by our delighted stares, they will relentlessly try to rip out the last bits of sea sponges that were seeking shelter by growing inside small coral crevices. Sometimes, as they break up pieces too big to swallow, they will violently try to hold them with their front flippers to get rid of the excess, much like a cat using its paws to wipe its face clean (and just as cute to look at!)

At the end of the day, their insatiable appetite plays a vital role in keeping coral reefs healthy by removing potential competitors that could inhibit coral growth. It’s estimated that one turtle consumes over 1,000 pounds of sponges per year! No wonder we always find them feeding...

It’s not all bad news for hawksbill turtles though, since at our reefs they regularly get to encounter friendly and respectful humans who are eager to study their behaviour and movement patterns, and who keep a watchful eye out for them. 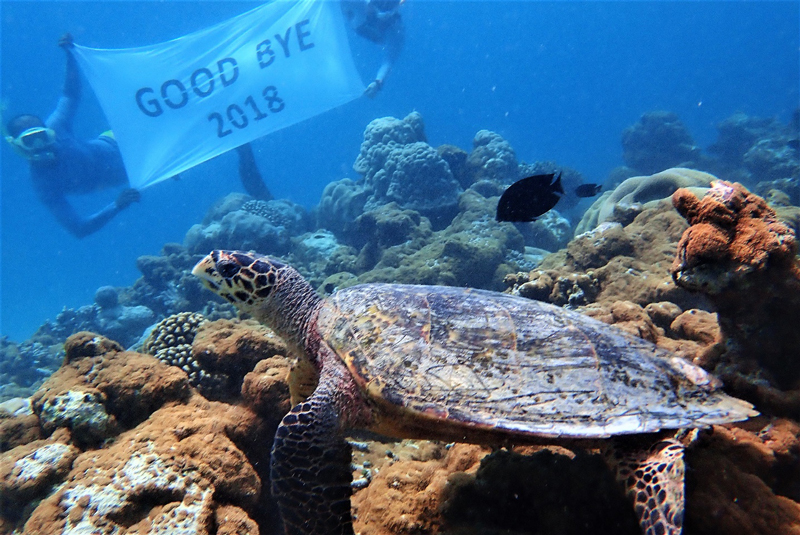 Chloe saying goodbye to 2018 on our last snorkelling trip of the year!

One of our usual suspects at the reef is a large and virile male turtle called “Monty”, or HK342 which is his official ID code. Mature male turtles can be identified by a large and bulky tail that is reduced to a mere stump in the female anatomy.

So how do I know that the male I´m looking at is Monty, you may ask? Every sea turtle has a different pattern of scales on the sides of their head that acts as a fingerprint and allows me to identify the turtle as Monty beyond the shadow of a doubt. He likes to hang out around the reef like he owns it, always unbothered by our presence and carrying himself with a sort of confidence that comes with years of experience of feeding in the presence of inquisitive humans who are trying to show off their free diving skills. He is one of the most sighted turtles and the only known mature male at our “Turtle Point” reef. 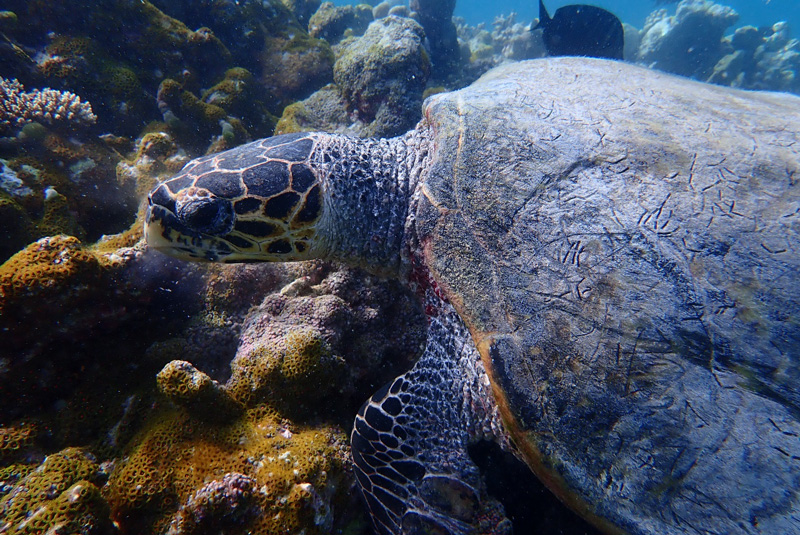 Another frequent sighting is HK1075 aka “Senge“, an adorable juvenile who is easily identified by the white growth pattern that covers a large portion of its carapace. Senge always acts relaxed when in our presence and usually cannot be bothered to give us more than a quick scan through a half turn of his head, as if to say, “Who’s blocking my sunlight?” 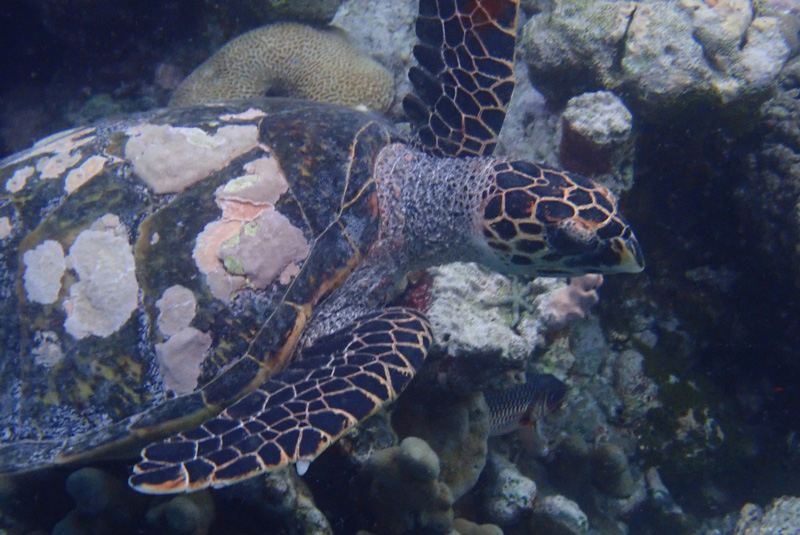 Senge giving me the side eye

My personal favourite is a young turtle named Kimi (HK3557), who was first discovered in November 2018 and who immediately caught my attention because of its small size that didn´t match its strikingly confident and proud attitude. Since its recent discovery, Kimi has been seen countless times exploring all parts of the reef and happily feeding away in that powerful and vivid manner that I so admire about her – or him? It is too early to tell.

Kimi ready to dive after taking a breath

Many more turtles roam our reefs on a daily basis, many of them loyal to their home and more than willing to share their space with us. Peaceful coexistence is based on us being respectful visitors in the ocean and following a few simple guidelines that will prevent the turtles from experiencing stress or fear in our presence.

As with any other wild animal, it is important not to touch it or to chase after it, as this will most likely negatively condition them towards humans. Feeding the turtles is not recommended as they have a specific diet that keeps them fit and which plays a vital role in maintaining the health of the coral reef ecosystem.

However, our hawksbills are as friendly, patient, and gentle as can be and are more than happy to be filmed or photographed! Should you get a nice enough headshot, don’t hesitate to come see me in my office so that I can tell you exactly which one of our amazing turtles you just had the pleasure of meeting! 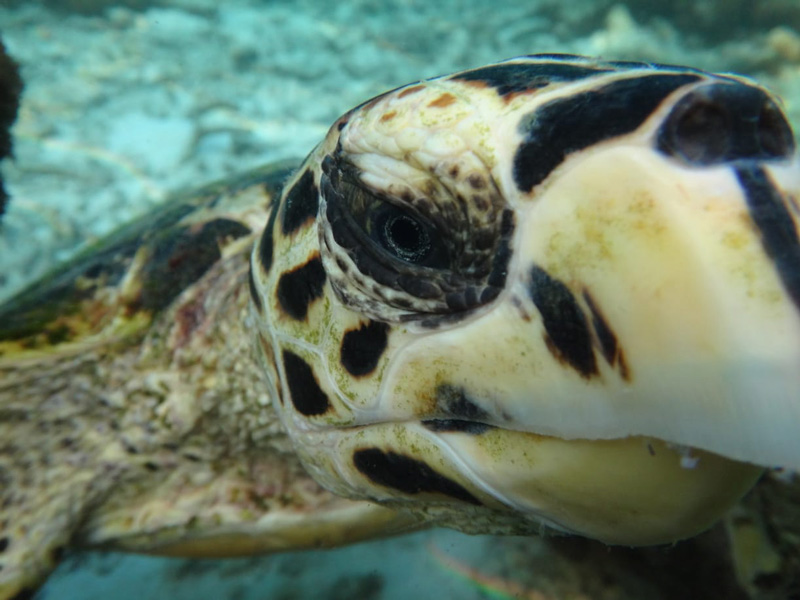 Lua feeling adventurous and curious about the camera