This week on Coco Cares, our resident Marine Biologist Sonia Valladares is taking you on another educational ride. This time, it’s about our corals! Keep reading to find out all about the types of coral you may spot around Coco Bodu Hithi. 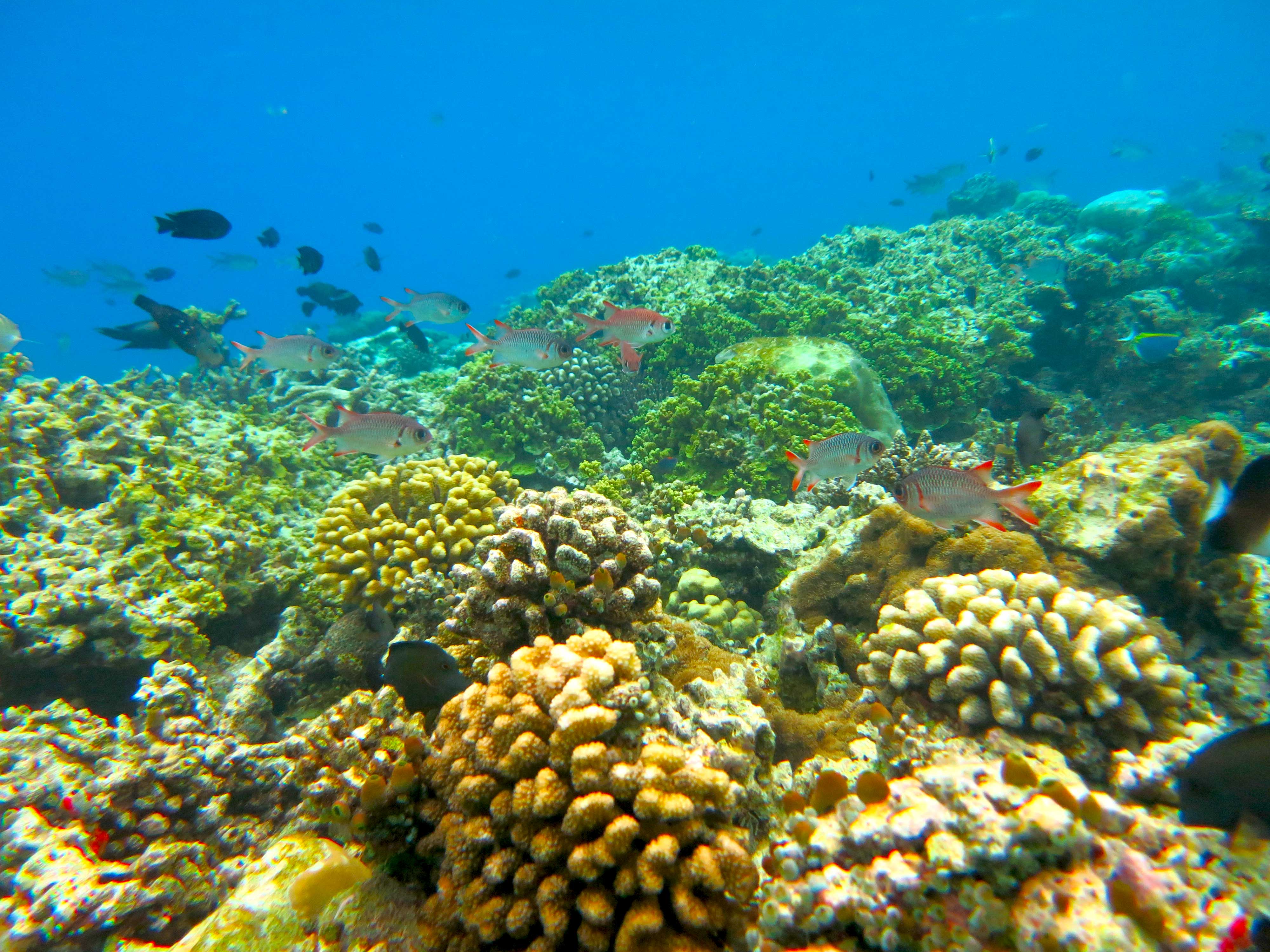 Coco Bodu Hithi is blessed to be surrounded by one of the most beautiful house reefs in the atoll. Do you know what the pillar of the reef is? The hard corals! These are the builders of the entire coral reef ecosystem.

Hard corals grow in colonies and every single individual is a tiny animal called a polyp. When polyps grow, they create layers of calcium carbonate under their bodies, which eventually becomes rock. That is why these corals are called hard corals, and as a result, these colonies create the coral reefs. 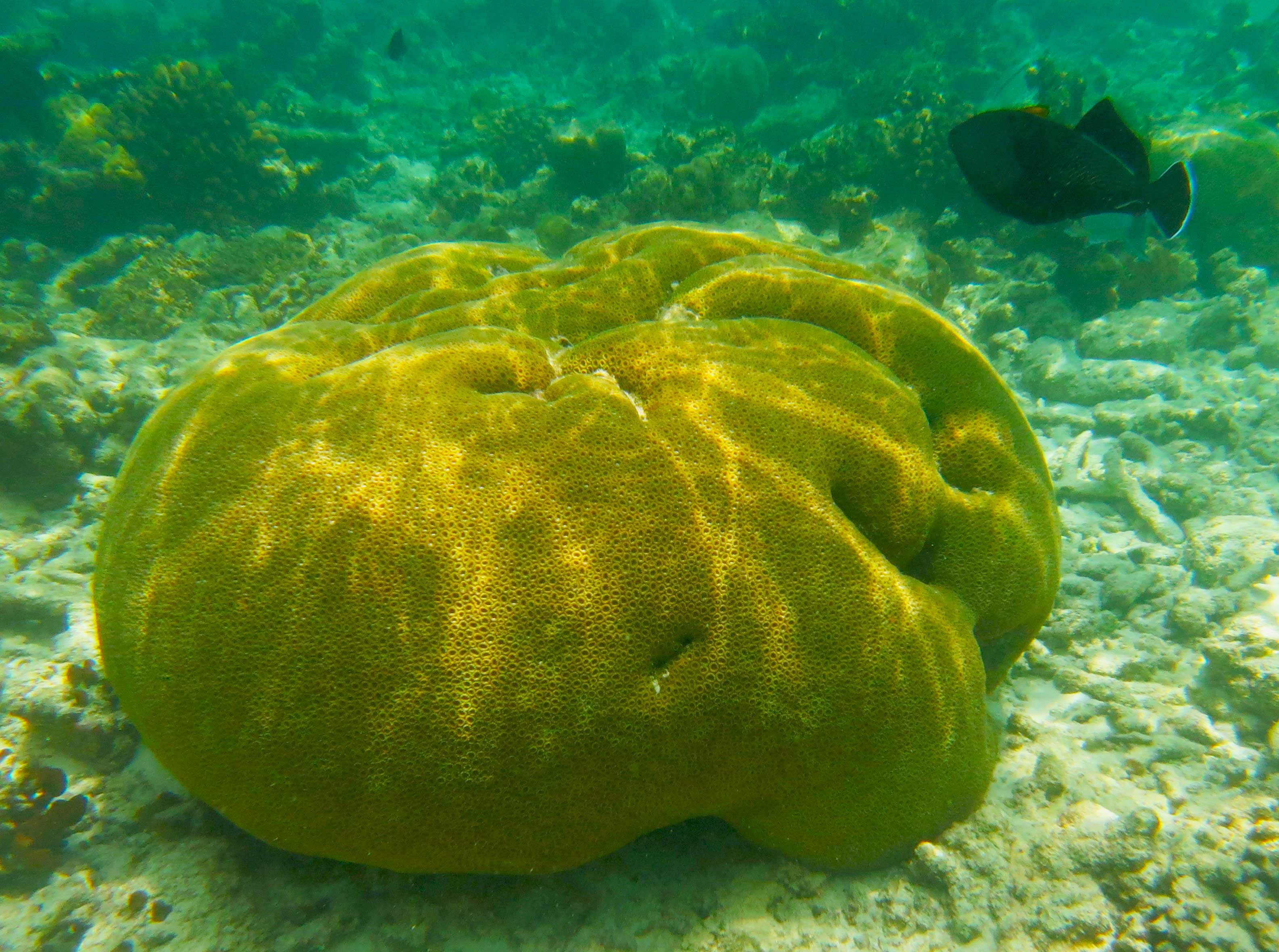 The variety of coral colony shapes and sizes depending on the types of coral. Some corals can have pointed or branching shapes, while others form flattened shapes. Which ones can we find at our house reef?

Massive corals
These are usually ball-shaped with a smooth surface, sometimes with irregular nodules and usually appear in a cream yellow or brown colour. Despite the slow-growing characteristic of the colony, this coral can reach a massive size after hundreds of years. 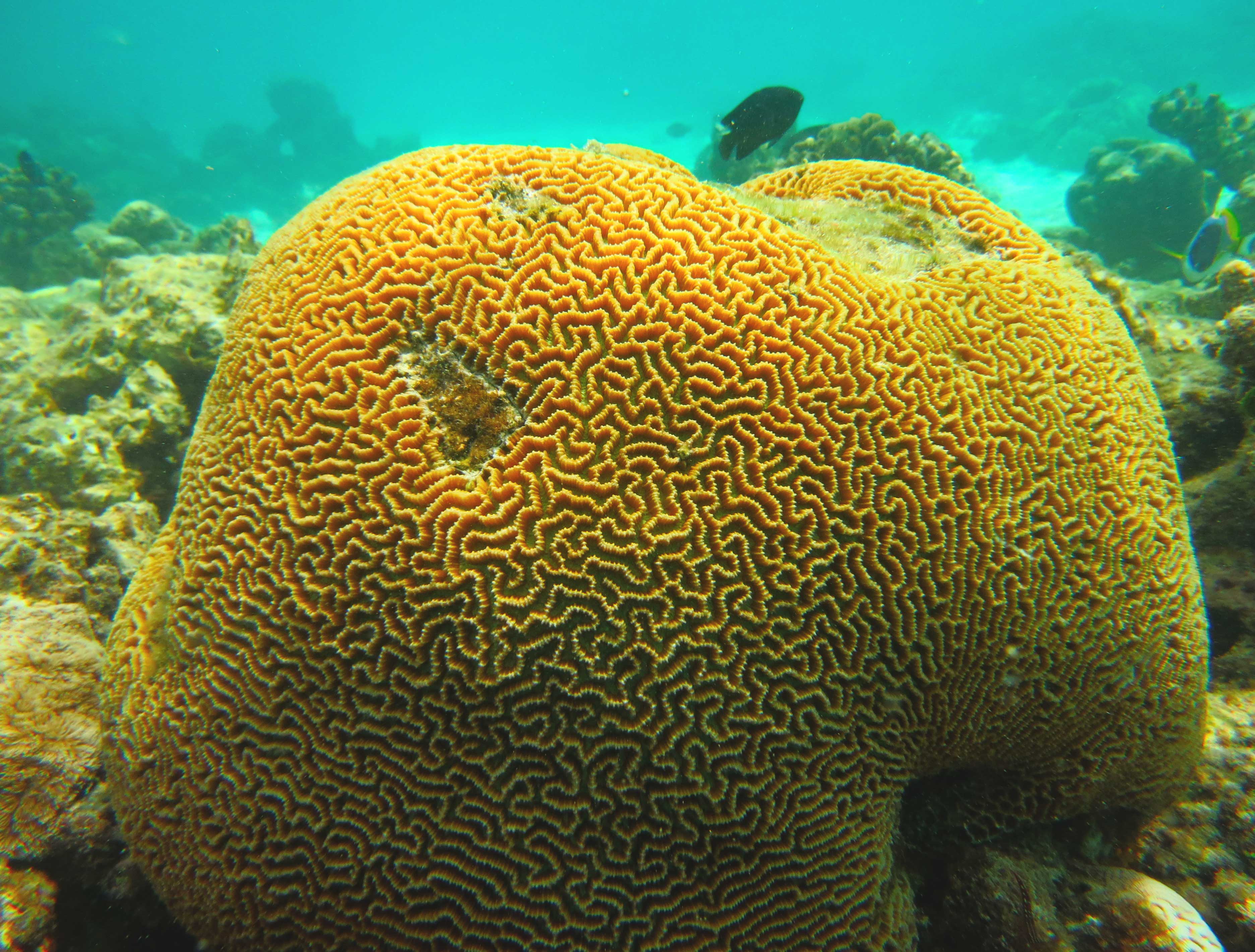 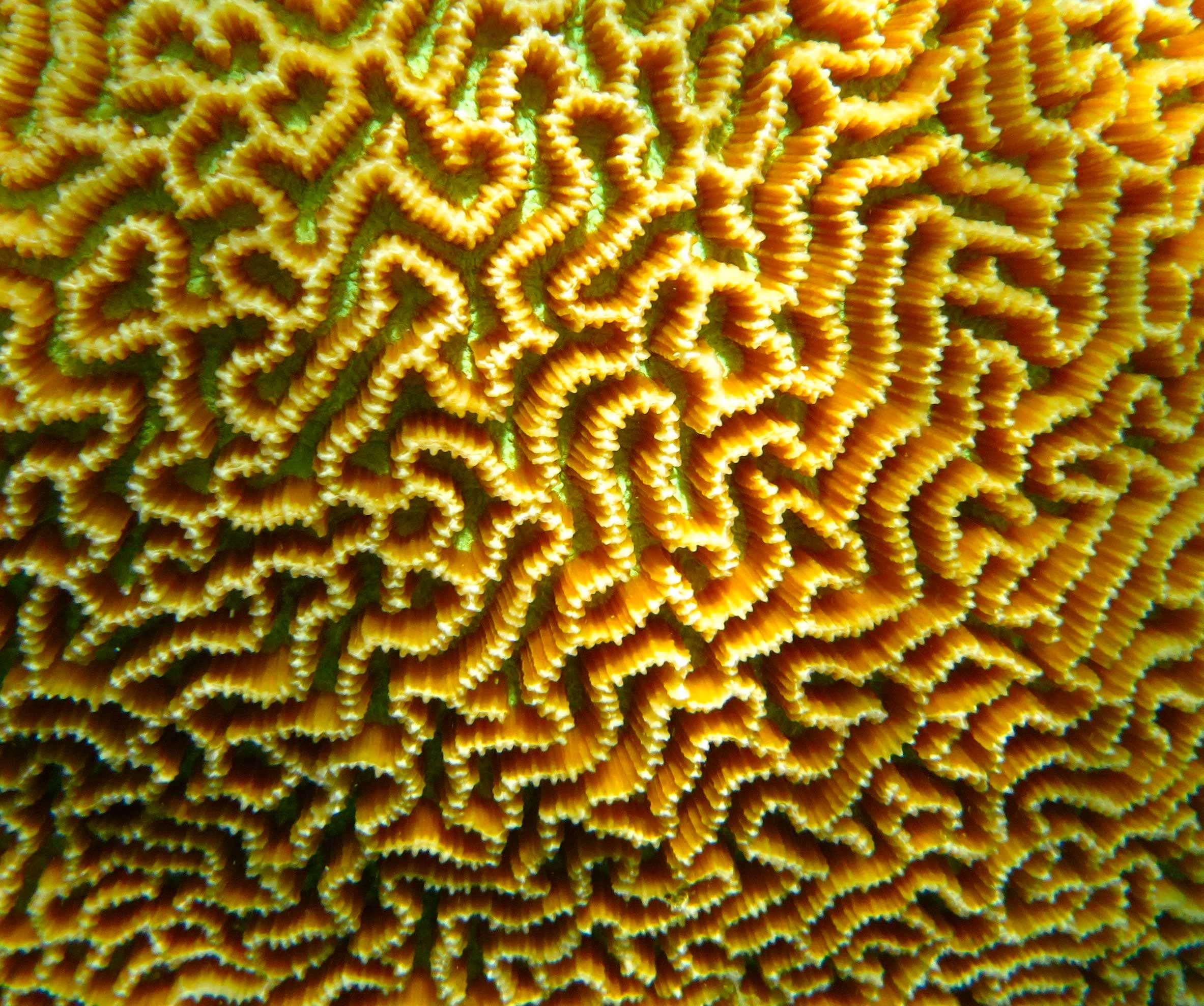 Close up of the brain coral 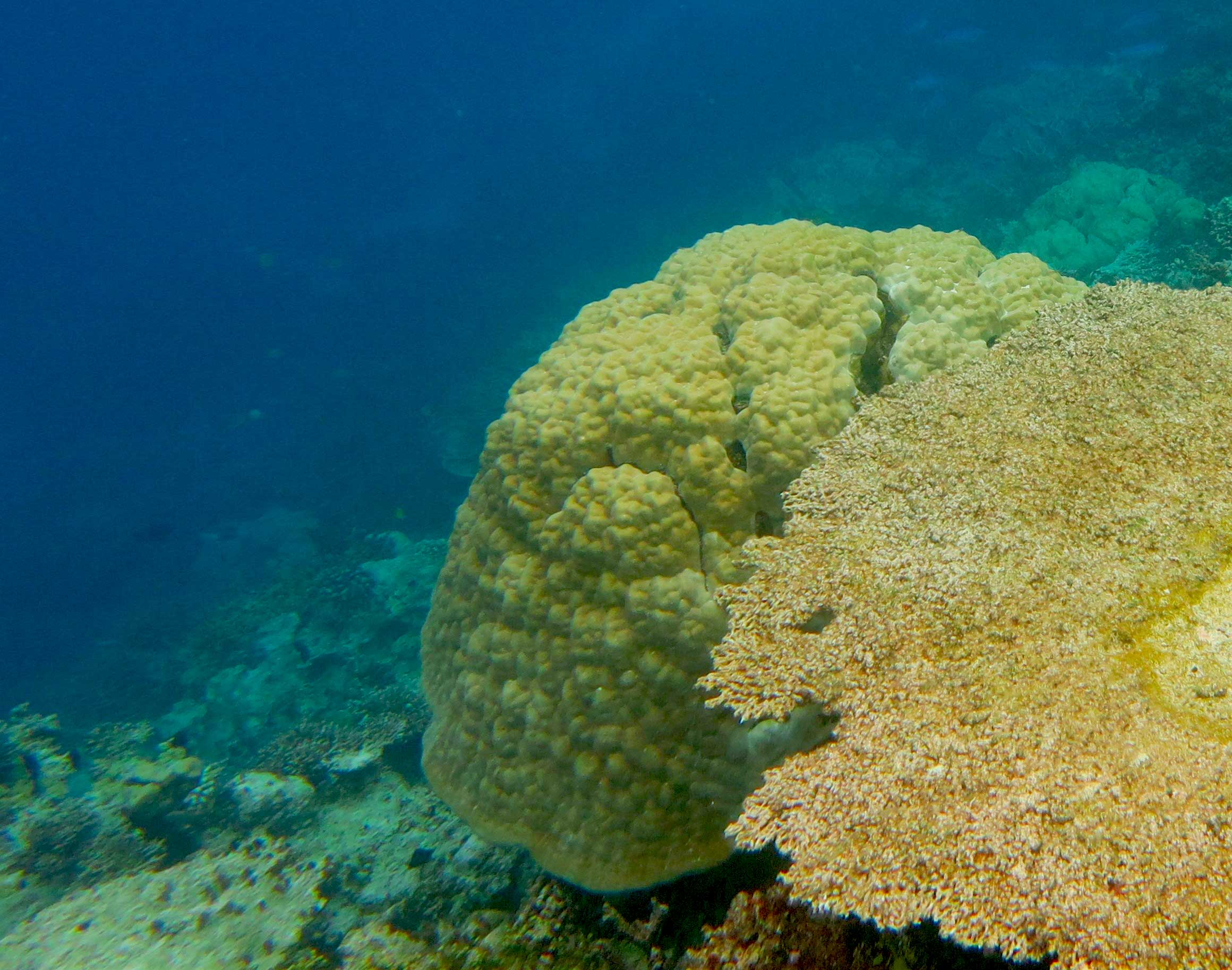 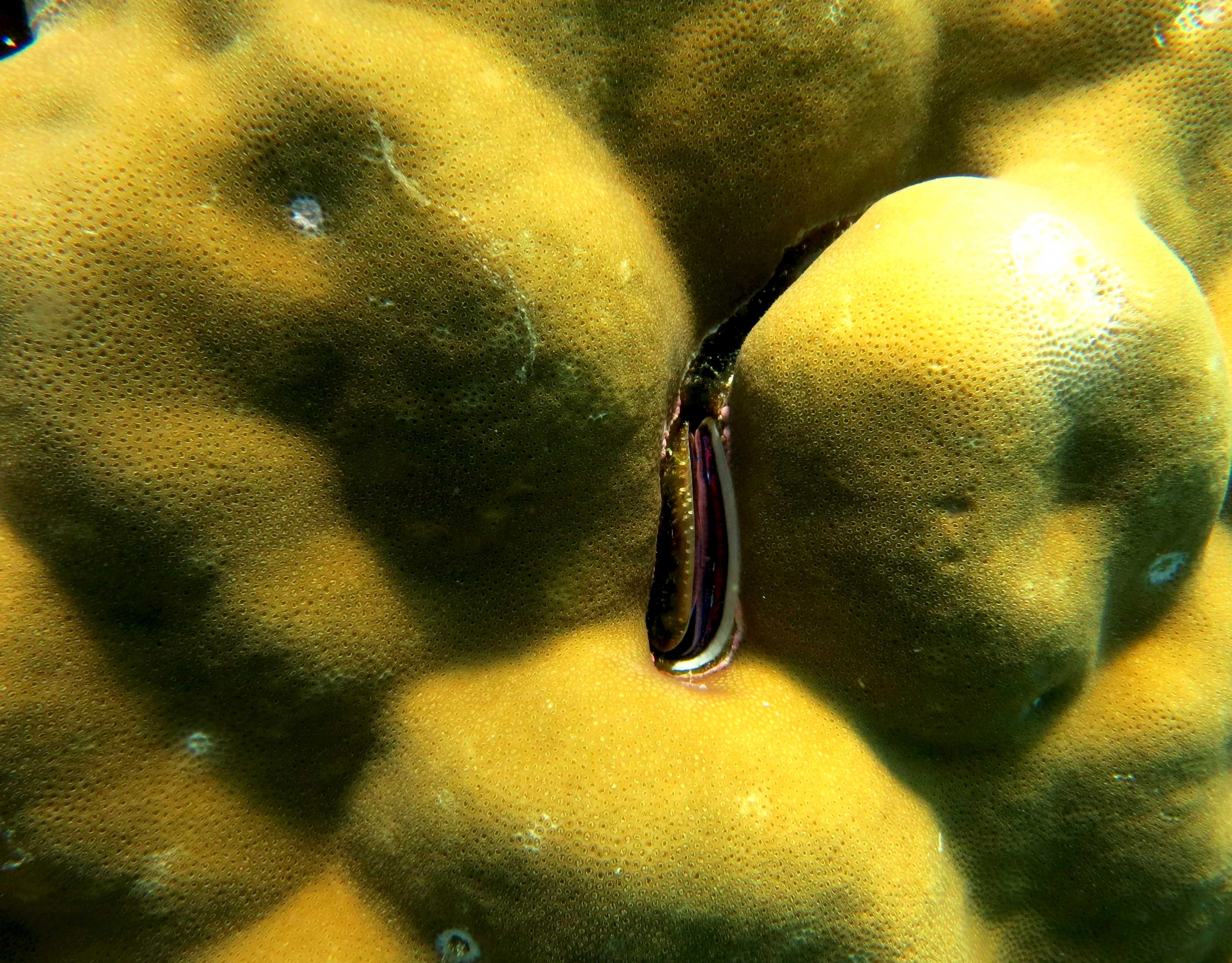 Branching corals
These are characterized as corals having numerous branches, usually with secondary branches coming out of them. The colour varies, and may be pinkish-brown or greenish. Staghorn corals or Acropora are among the fastest growing branching corals on the reef, and colonies can be upto 2 meters tall. However, they are particularly vulnerable to the increase of ocean temperature that cause bleaching and death of the coral, and typically take a long time to recover. Hood corals or Stylophora are another type of branching coral. They form small bushes with finger-like branches, and are found sparsely along our reef. 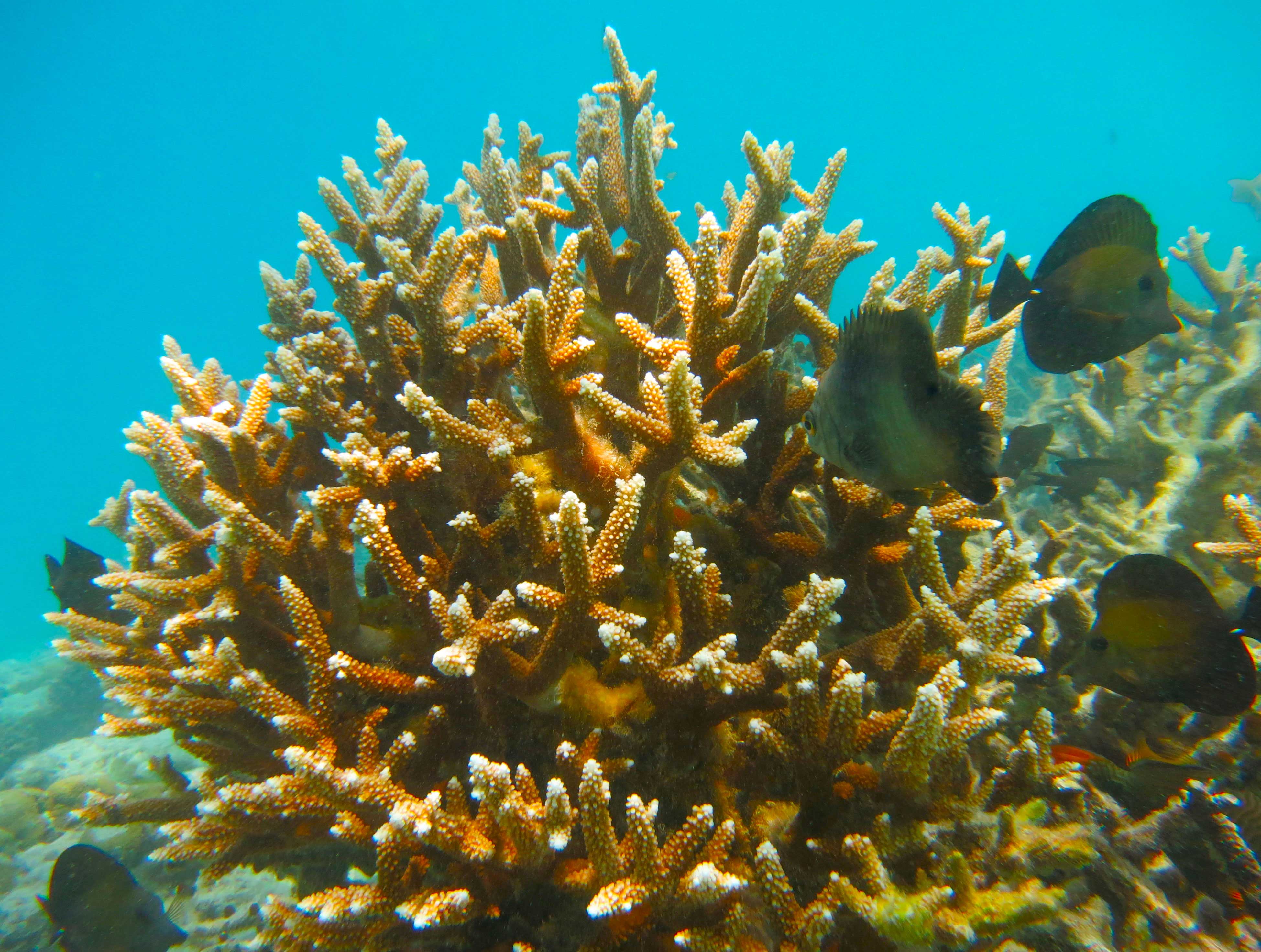 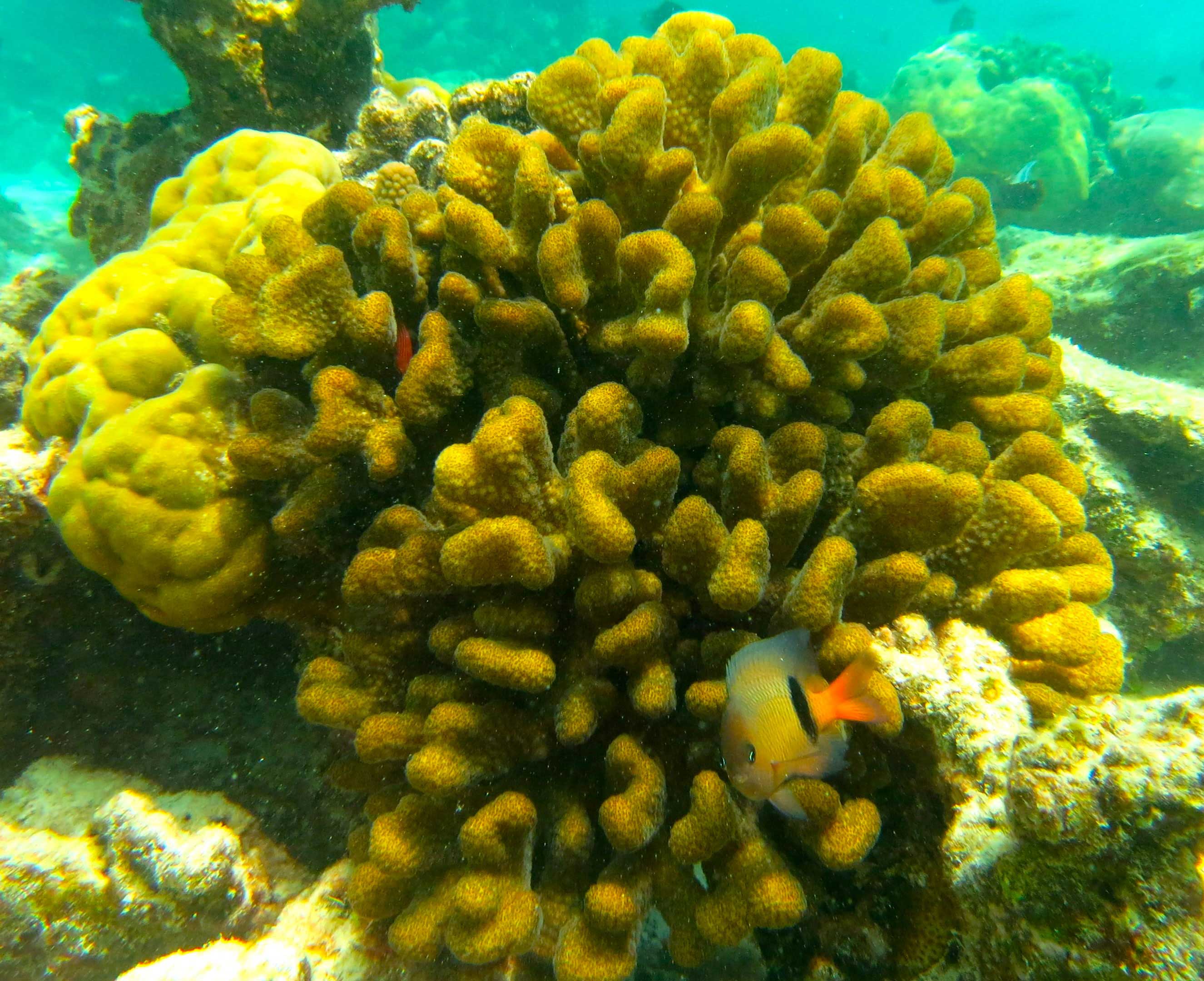 Flowerpot corals
These corals get this name because of their similar appearance to flowers when the polyps are open. Unlike most of the hard corals, the flowerpot corals extend polyps outward from the skeleton, day and night. They are usually brown, yellow or green in colour.
Flowerpot corals, despite their delicate names, are generally aggressive animals. They can use the elongated polyps to cause severe tissue damage on a coral within their reach. Therefore, it is unusual to see other coral species growing close to the flowerpot coral. 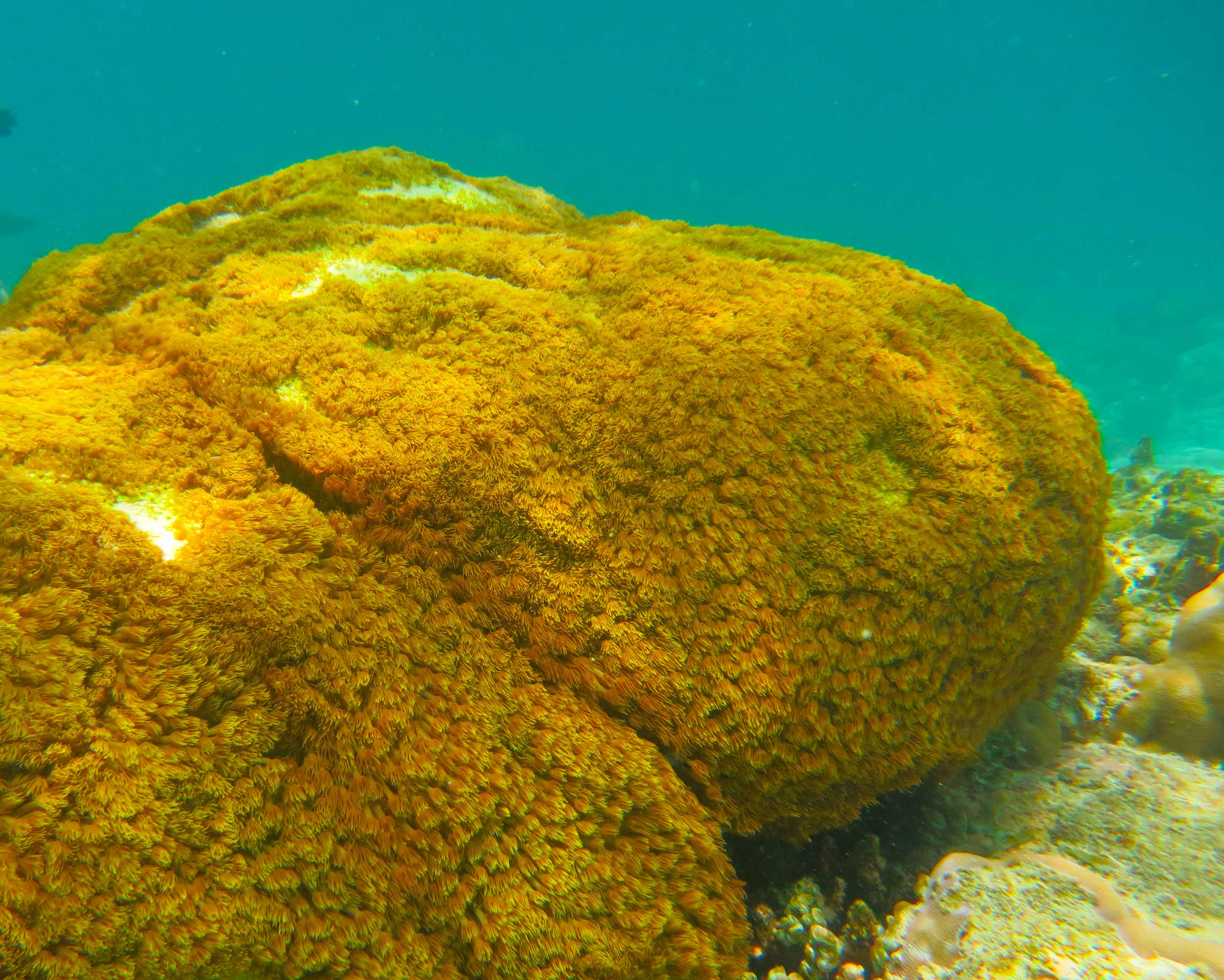 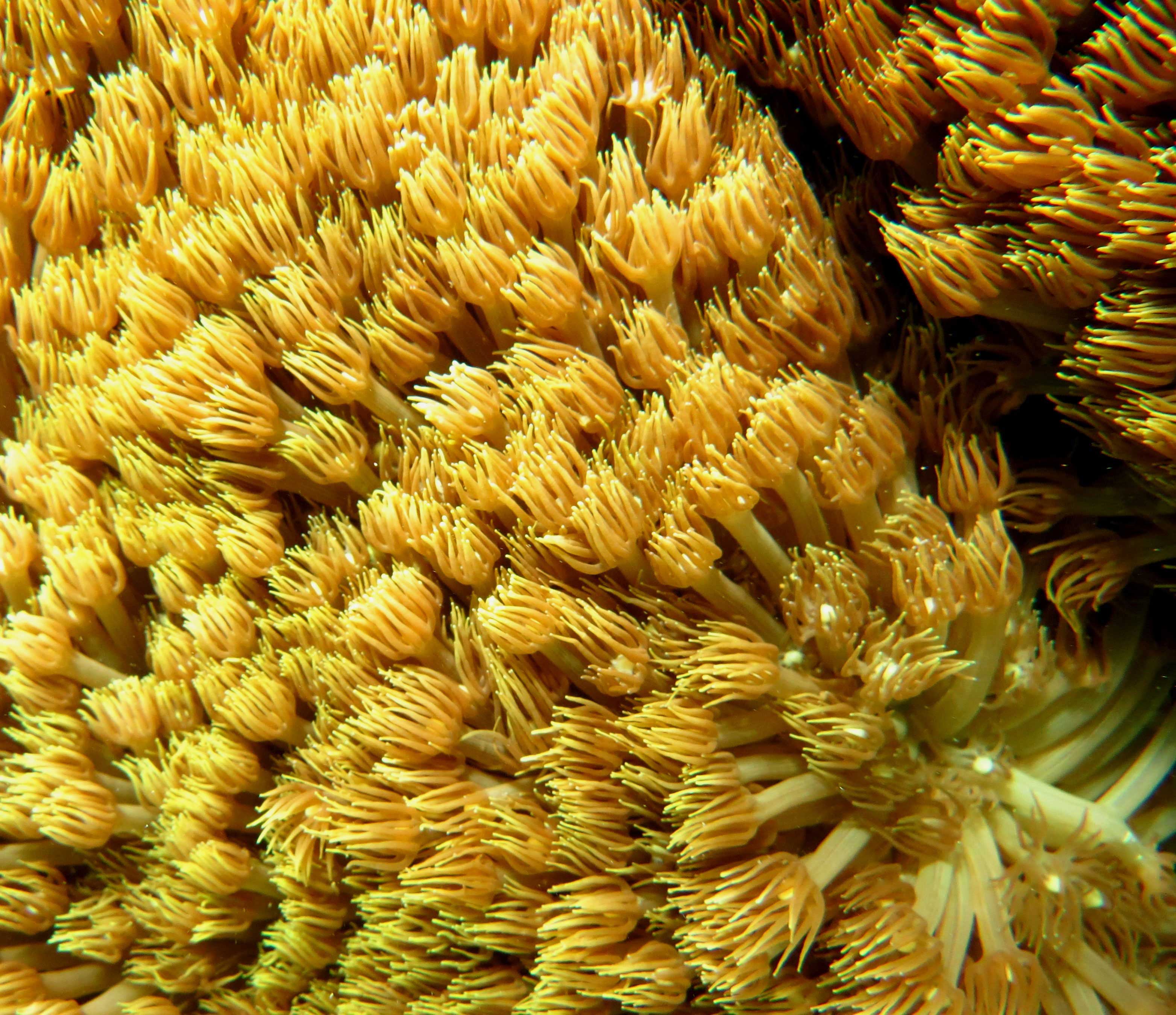 Close-up of the Goniopora coral

Blue corals
These have a distinctive blue skeleton which is generally hidden by the greenish-grey colour of the polyps. Its interior becomes blue due the corals ability to extract iron from surrounding water into a blue salt, which is then deposited onto the skeleton. The polyps live in tubes and the colonies form plate-like or columnar colonies. 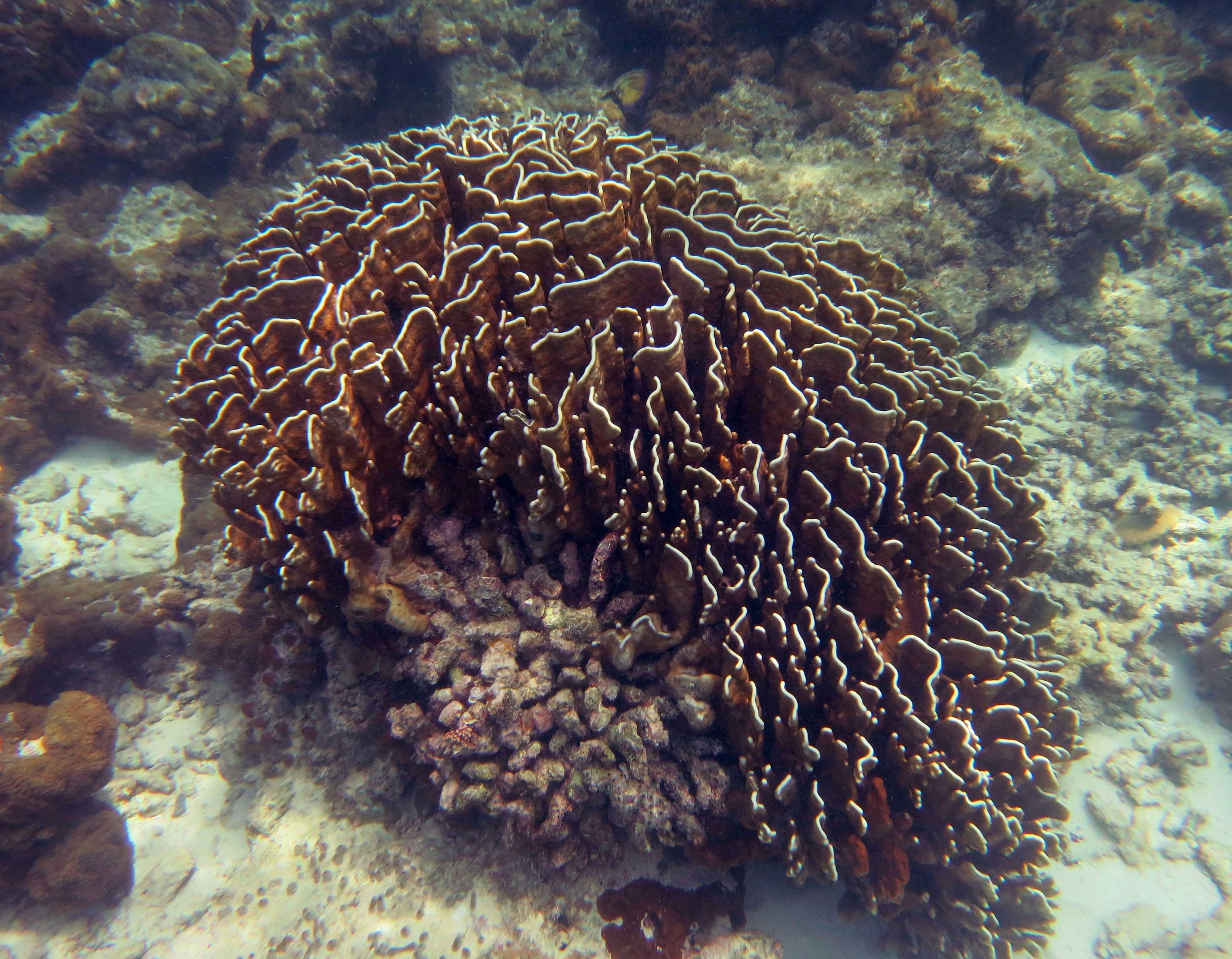 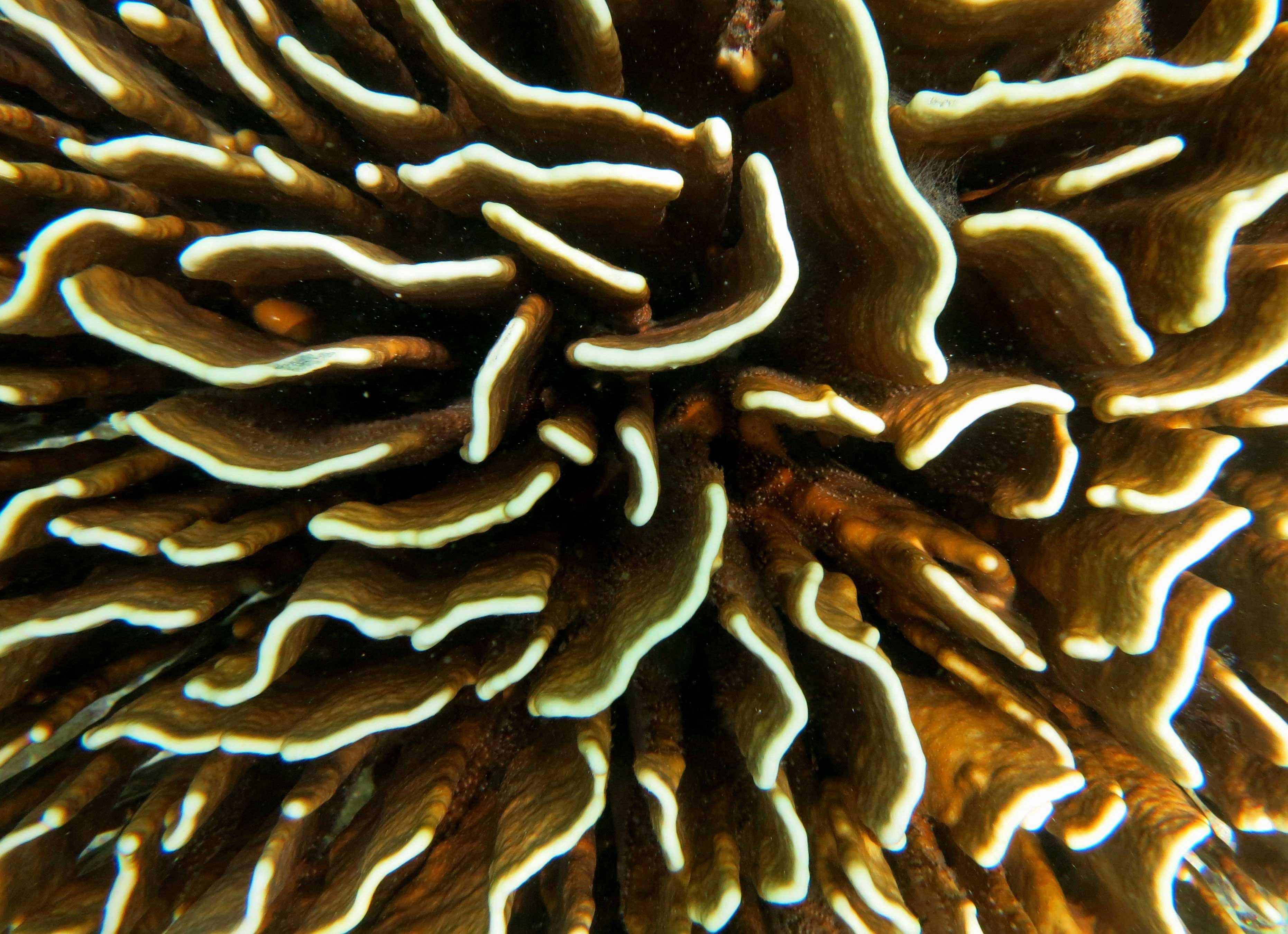 Close up of the Heliopora coral

Mushroom corals
Mushroom corals or Fungia corals, rather than forming colonies like most other corals, are solitary and usually free-living corals. Their resemblance to mushrooms obviously gives these corals their common name. They are flat or disc-shaped, and can be circular or elongated. 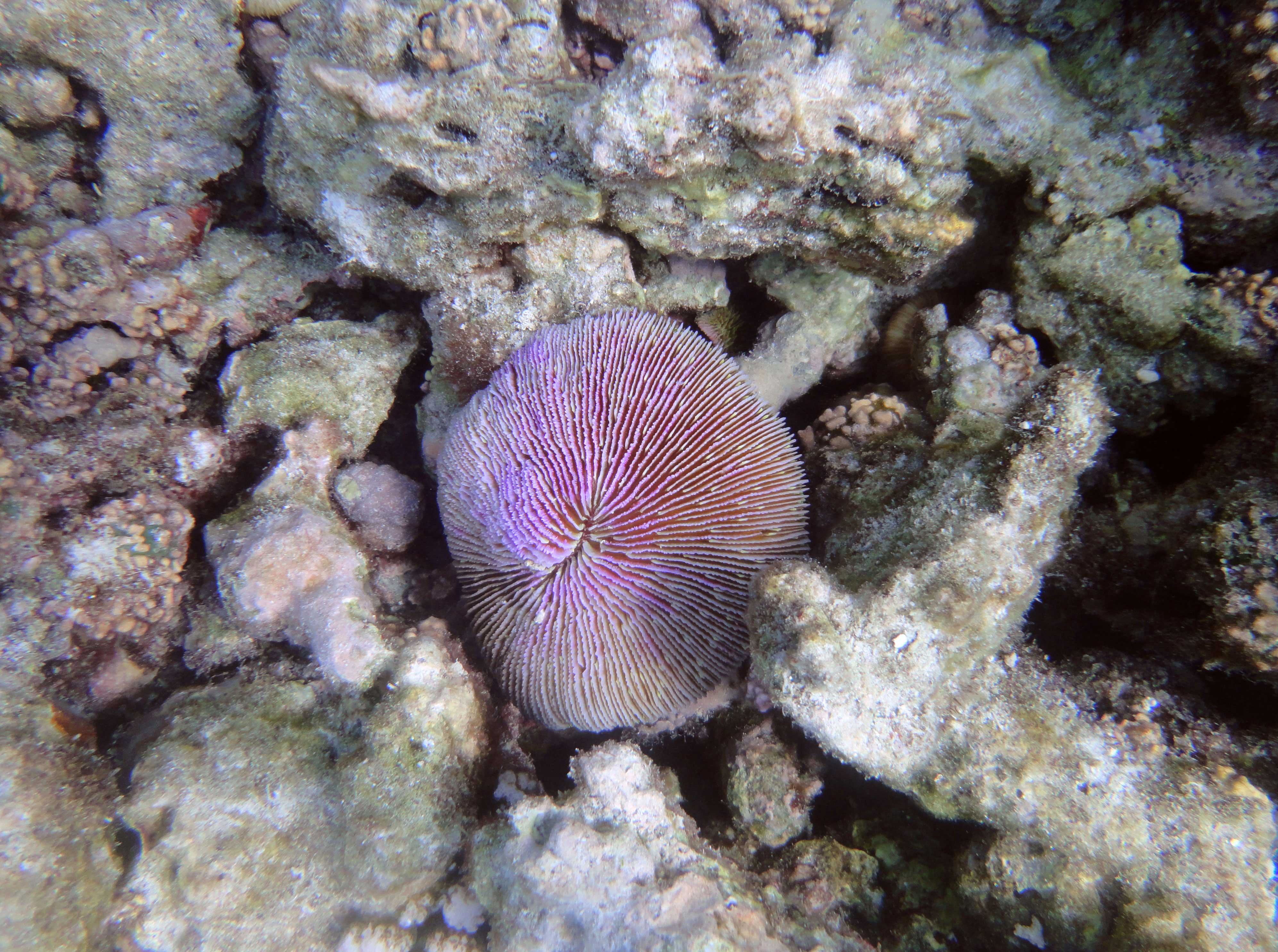 Most of the hard coral polyps have clear bodies, without colour. So why can we see striking colours in our coral reefs? Simple! The colour of the corals is provided by the microscopic algae (zooxanthellae) that live inside their tissue. Millions of algae produce pigments that are visible through the clear body of the polyp, giving the coral its beautiful and unique colour.

In addition to the colour benefit, corals and algae have an essential mutualistic relationship. Through photosynthesis, these algae produce energy-rich molecules that the coral polyps can use as nutrition. In return, the coral provides the algae with protection and access to sunlight. The relationship between the algae and coral polyp facilitates a tight recycling of nutrients in nutrient-poor tropical waters.

So there you go! Coral 101 by our resident Marine Biologist Sonia Valladares! Don’t forget to keep an eye out for these when you go snorkelling at Coco Bodu Hithi next time.