Mantas - The Queens of the Oceans

Our Marine Biologist at Coco Bodu Hithi, Carolina de la Hoz Schilling, tells us all about the manta rays near Coco Bodu Hithi in our latest Coco Cares entry.

To visit Coco Bodu Hithi between December and April is an exciting time as our little island is just a quick 15-minute Dhoni ride away from Rasfari North, a lengthy and flat reef that is regularly visited by nomad Reef Manta Rays (Manta alfredis) during the Northeast monsoon season. 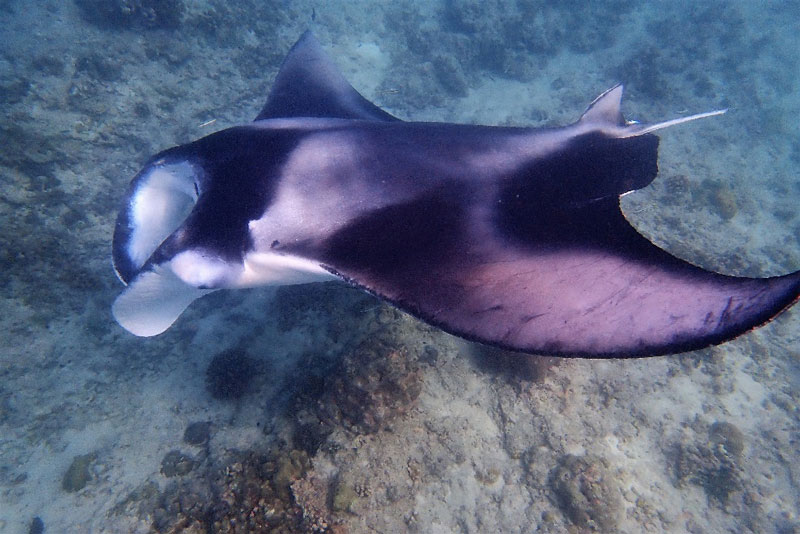 These majestic elasmobranchs don´t choose the reef randomly, but rather it is known to them as a fancy spa area, or as we marine biologists call it: a cleaning station. As a marine animal, your limbs are usually short, stiff or restricted in movement and function. If ever an annoying parasite settles down on your back, as a Manta Ray you will hardly be able to scratch yourself. The ocean is a wondrous place where the different ecosystems, such as coral reefs, are well-oiled machines and animals may eat each other but they also help each other. Inter-species interactions are common and cleaning stations are a perfect example of how certain animals operate under unspoken rules of trust and cooperation. Cleaner wrasses or shrimps, amongst others, clean bigger species of fish, sharks, rays or turtles of parasites and algae; a valuable food source to them, and in exchange they are granted immunity from their clients’ appetite. Even a sharks’ mouth is a danger free zone for them! 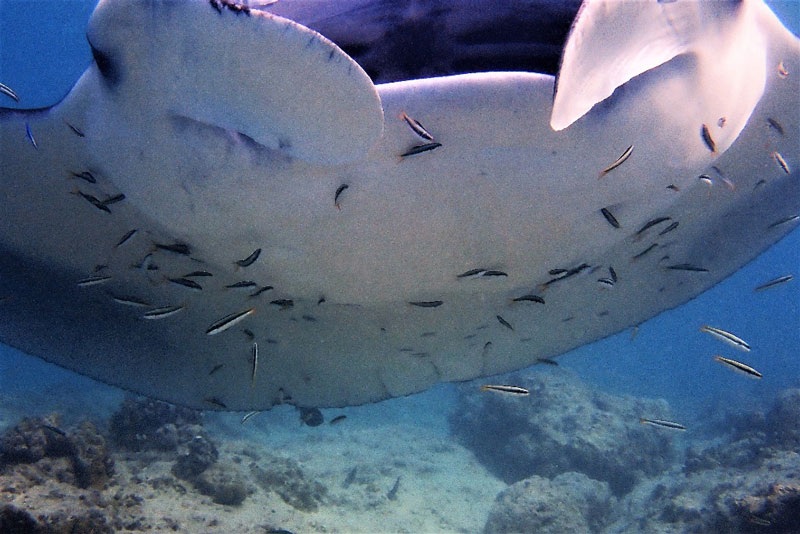 Experiencing Manta Rays up close is a thrilling adventure for nature lovers, as they spend a fair amount of time roaming the surface waters chasing their preferred food source: plankton. Once upon a time they were named “devil rays” due to the shape of their cephalic lobes that form a funnel-like structure while feeding and help them channel plankton-rich water into the their gaping mouths. Not to say that Manta Rays are vegetarians, but they certainly are inoffensive, gentle and often quite curious. Equipped with significantly reduced teeth, a stingless tail and the biggest brain of all fish (relative to their body size) they pose no threat to humans but offer a stunning sight at an impressive 3-5 meters wingspan. 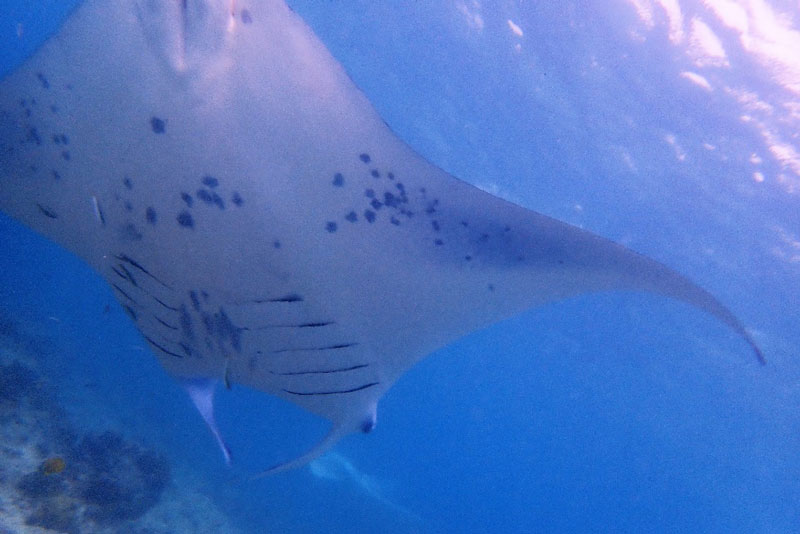 Spot pattern on a manta's ventral side

If you have read my previous post on hawksbill turtles, you know that turtles can be individually identified by the scales on the sides of their heads. In turn, manta rays display different patterns of black spots on their ventral side (belly) that allows us to identify them and follow their movement patterns. That is how I know that “Shania” is a mature female that is loyal to our North Male Atoll, since she hasn´t been photographed anywhere else, or that “Slider” is one of the few known manta rays that have travelled to four different atolls! Gathering biological and behavioral information on manta rays is becoming increasingly important with rising human threats. It is not rare to see manta rays with fresh wounds or old propeller marks on their bodies due to boat strikes, but unfortunately the biggest threat they face is overfishing, entanglement, habitat destruction, and of course pollution. As filter feeders they are at high risk of accidentally swallowing plastic debris that can be potentially lethal. 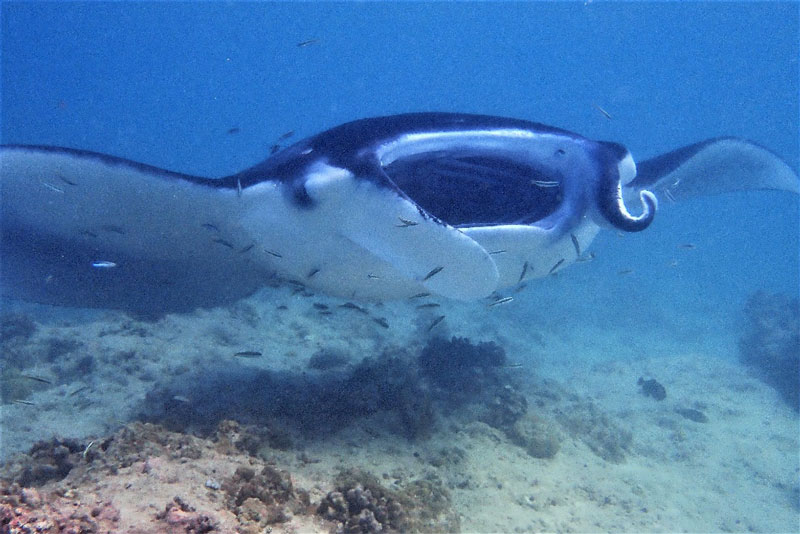 The Maldives is home to the largest known population of reef mantas in the world with an estimated 5,000 individuals. However, the Maldives is also a popular tourist destination mainly due to the abundance of ocean wildlife that can be found here. Mantas attract thousands of people every year, which benefits the Maldivian economy but can also have some negative associated impacts on the manta rays and their habitat. Therefore, it is important to follow proper guidelines as well as to respect some basic rules regarding manta encounters:

1. Always keep calm, quiet and relaxed around manta rays in order to avoid making them nervous or uncomfortable.
2. Don´t approach the manta closer than 3-5 meters and allow the animal to choose whether it wants to interact or not.
3. Never touch or chase after a manta ray as that is a clear invasion of their personal space and may be perceived as a threat, causing them to leave and potentially avoid certain important places in the future.

If you should be fortunate enough to visit Coco Bodu Hithi during manta ray season and you join me on a tour, you will most certainly be touched by their grace and beauty and, if you´re lucky, this will be your next Instagram post: 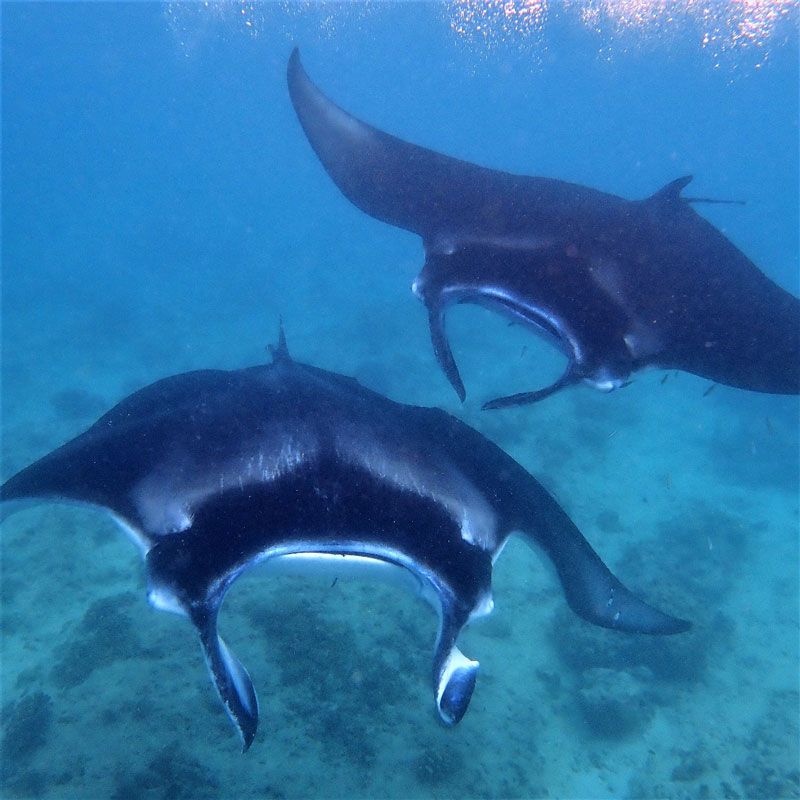