Our Favourite Bird, The Parrotfish

We are very excited to welcome Ida and Jess, our new Marine Educators at Coco Bodu Hithi. This month, they will tell you a little bit about themselves, and what their favourite bird is on the island. Their pick is sure to surprise you!

Ida is a 25 year old from Namibia and she has a degree in Marine Biology from the University of the South Pacific, based in Fiji. During her time there she completed work experience with NOAA, Operation Wallacea, the UN and WWF. Before her studies she worked with Coral Cay Conservation in Cambodia and the Philippines, where she got her diving licence and completed over 180 dives. Ida has also worked at Namibian Dolphin Project and got a scholarship to attend the first Bioacoustics seminar in Africa. She is passionate about restoring the balance between humans and nature and wants to see a world where we live in harmony with nature again.

Originally from the UK, Jess has a background in coral restoration and sustainability having previously worked in Florida, Mexico, the Maldives, and Seychelles. In her last position, she managed the coral nursery project, transplanting 1,500 endangered coral fragments back to reef. She plans to use this knowledge to restore the coral reef at Coco Bodu Hithi and educate guests on the importance of the ecosystem. Experienced in sustainability, Jess aims to work on Coco Bodu Hithi’s environmental footprint and reduce plastic with Coco’s team of eco-warriors as well!

The Maldives is known for having some of the best beaches in the world surrounded by crystal clear waters and colourfully diverse coral reefs. But where does this beautiful postcard of perfection come from? Well, there are many factors that we can thank for it; but perhaps the most unexpected one of all is the Parrotfish in the Maldives. 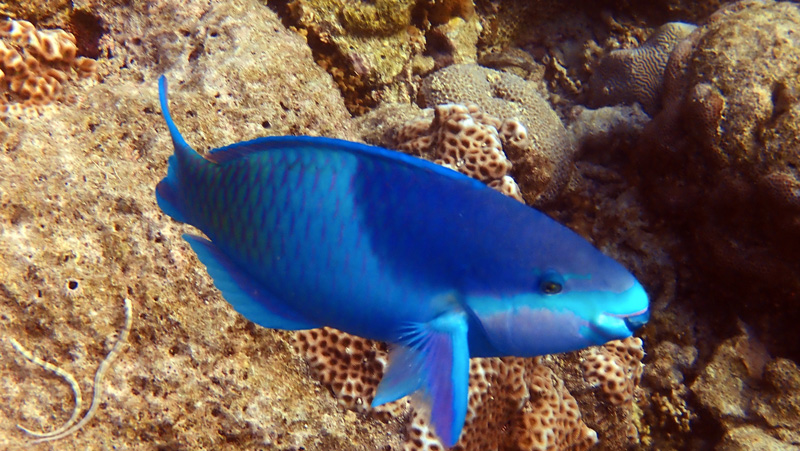 Believe it or not, these beautifully coloured fish are the reason we have white sandy beaches in the first place. There are many different species of Parrotfish and they all belong to the family Scaridae. Despite their very colourful, parrot-like appearance, these beautiful fish actually get their name from their unique set of teeth. They have very tightly packed teeth that mesh together and form a parrot-like beak, which they use to get their food. Even though they can be seen chomping on coral, which are a colony of animals, they actually eat the symbiotic algae that live within the coral. Hence, most species of Parrotfish are actually classified as herbivorous or corallivorous.

But what does all of this have to do with white sandy beaches? Let me explain it this way, when parrot fish are scrapping off chunks of coral and limestone rock, they are only capable of digesting the algae, the rest of the limestone is then excreted as fine white powdery sand aka, Parrotfish poop. 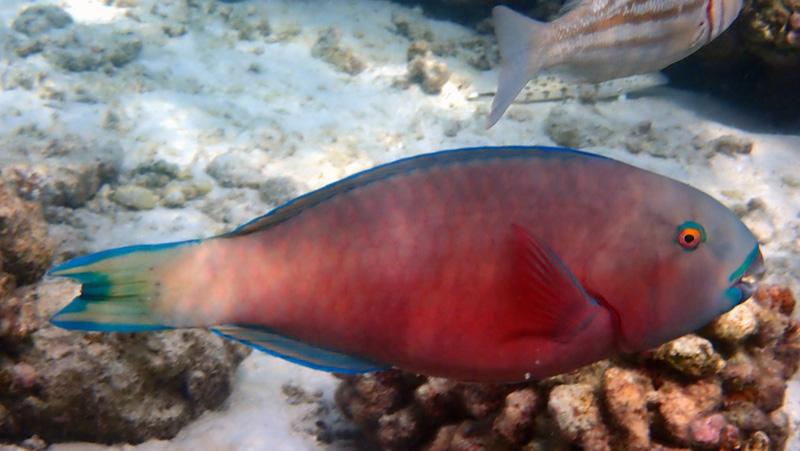 Recently, studies have shown that Parrotfish can generate more than 85% of the sand found on white sandy beaches, and that only one of these beautiful creatures can poop up to 250g of sand in just one day. That’s over 90 Kg of sand in a year from just one fish!

Not only are Parrotfish the reason we have beautiful, white sandy beaches, but they are also part of the reason we have healthy reefs to begin with. These colourful, sand pooping creatures are also the gardeners of the reef. A comparative study was done and it was found that reefs with significantly low numbers of parrot fish were overgrown with algae which block the corals from getting sun so they end up dying.

But wait, the interesting facts about these amazing fish don’t end there, and I’m sure this next one will catch you off guard. Parrotfish are protogynous hermaphrodites, which mean that during the first phase of their lives, they are females, and once they reach a certain size/age, they turn into males. They live in harems with one big male that protects their territories and when the male dies, the biggest female turns into a male. The females in most species of Parrotfish can be identified by their red, grey, dark and sometimes pink colouring, whereas the males are a more flamboyant, blue with yellow, green and orange. 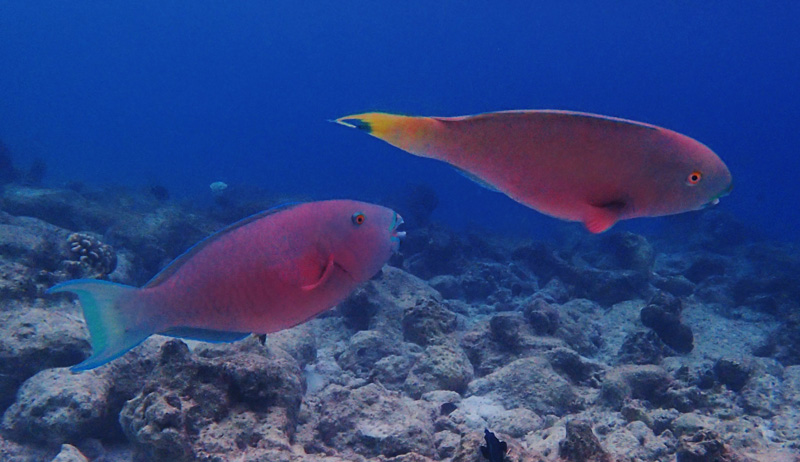 When night falls, the reef becomes a completely different place. Most of the reefs predators hunt at night, and without sunlight to see them coming, parrotfish have developed a very smart technique to protect themselves. Just before it becomes completely dark each parrotfish finds a well hidden spot within their territory. They spend about an hour secreting mucus from their gills. This mucus eventually covers their entire body like a sleeping bag and disguises their scent from predators such as sharks and eels. 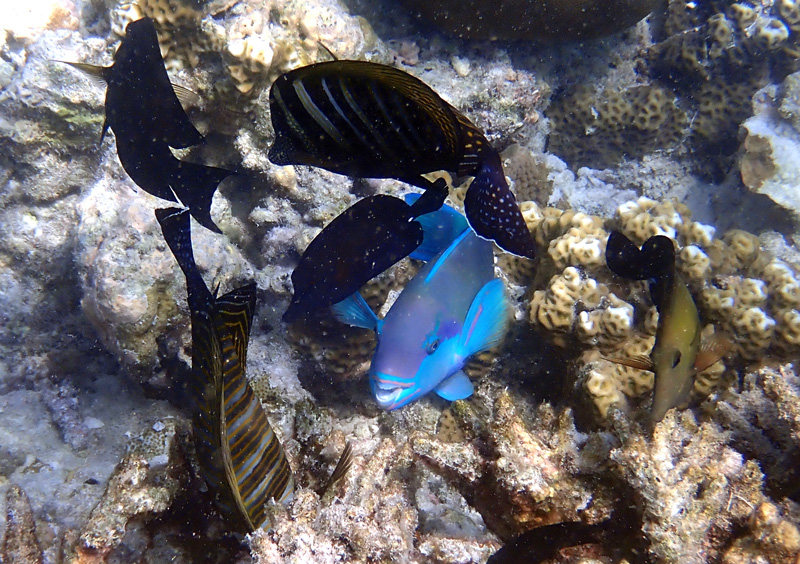 Although it is not prohibited to catch Parrotfish in the Maldives, as they are of least concern on the IUCN Red list, we at Coco Bodu Hithi believe that they are such an important part of our family that we do not allow the capture of any parrotfish species. So you’ll definitely be graced with their presence in abundant numbers while you hear them crunching on coral and watch them hard at work making your next white sandy beach holiday destination.