In this new chapter of our popular blog series, Daniela introduces us to some of her favourite underwater creatures while highlighting some the important inter-species relationships that help maintain the delicate balance of our marine ecosystem. 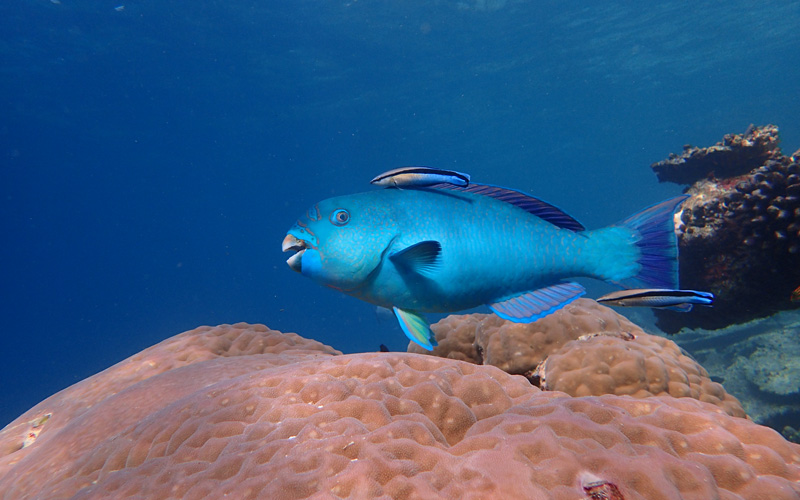 Small yet mighty - The Bluestreak Cleaner Wrasse (Labroides dimidiatus)
Often unnoticed due to their small size, the cleaner wrasse plays a vital role in maintaining a healthy coral reef.

Usually working in pairs, these fish operate in certain areas of the reef and offer a unique service- they remove external parasites from any fish that visits their cleaning station. In fact, many fish will stop off in the area just to get rid of their unwanted companions.

Scientific studies have shown that a reef patch without cleaner fish is less rich in biodiversity, and experimental removal of cleaner wrasses significantly increases the parasites on reef fish in that area.

Their service is so crucial that even carnivorous fish like moray eels and groupers, who prey on fish about the same size as cleaner wrasse, are regular guests at the cleaning stations. You can even see cleaner wrasse swimming in and out of the mouth of giant moray eels without any fear.

These little fish are also quite clever when it comes to getting their favourite food, which is actually not parasites but fish scales and mucus. By massaging the client’s body with their pelvic fins and by assessing each fish’s tolerance they make sure to get a good amount of the “good food”. Still, as soon as the cheating is noticed by the other reef fish, body shaking, chasing, and bites are typical responses of the betrayed customer. 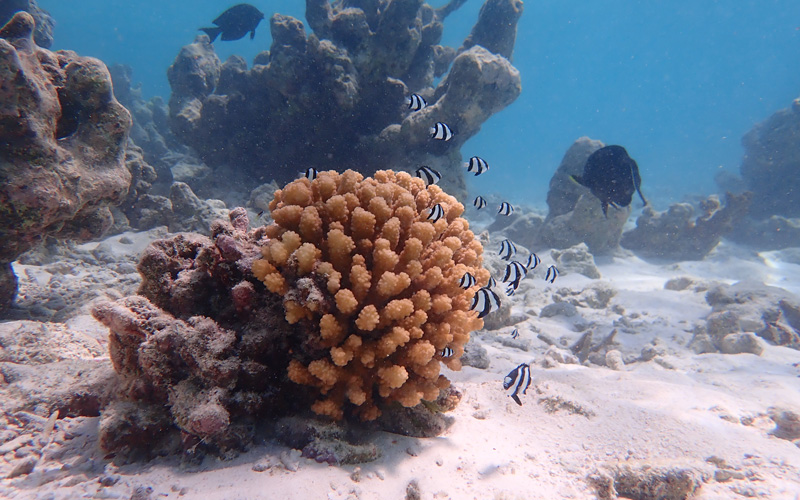 Not without my home! - The Humbug Damselfish (Dascyllus aruanus)
Many of you would be familiar with clownfish – featured in the movie “Finding Nemo” – who depend on their host anemone as their home.

Fewer people know that they are not the only fish with permanent homes. Some damselfish species like the humbug dascyllus can be seen swimming around certain finger or cauliflower coral using the branches as shelter, sleeping grounds, and nurseries. You will never see them very far away from a coral as they are easy prey when homeless.

Humbug Damselfish are quite territorial, defending their host coral against other fish but scientist found that the corals might also be getting additional benefits from these fish. Through their steady movements, an increased water flow can be detected, providing more nutrients for the coral and the excrements of the fish- which are rich in nutrition- might add to that. Corals hosting a group of damselfish are therefore found to have an enhanced growth and reproduction. 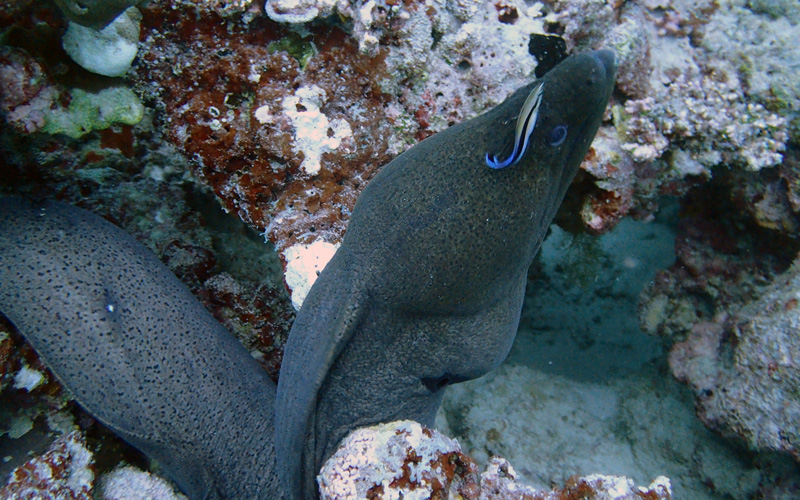 Moray eels are some of the most feared creatures in the reef, but they do not deserve their bad reputation. They are peaceful fish, hiding inside the reef where we usually find them sticking out their head and doing what most people believe is a threatening biting movement – in fact, this is their way of breathing by pumping water through their gills.

Additionally, these animals have some amazingly interesting behaviour when it comes to foraging. They commonly team up with groupers to hunt for smaller fish. Groupers are large predators, actively searching for prey which are often hiding underneath rocks or in between corals.

In order to get to the prey, they communicate the hiding place to a resting moray eel through headshakes and headstands. This behaviour motivates the moray eel to join the hunt and swim inside the crevice the grouper cannot reach. In such an instance, either the moray eel will be successful, or it just triggers the prey fish to escape out of the hole and right into the mouth of the waiting grouper.