We are bringing you another chapter of one of our hottest blog post series! This time around, the resident marine biologist at Coco Bodu Hithi, Sonia Valladares, is sharing some highlights about her favourite fish.

There are plenty of fish in the sea: small, big, colourful, and in peculiar shapes. You can admire a high biodiversity of them especially in the coral reefs, but when you are in the water, there are always some fish that catch your attention and make you stare at them. And here is my list of favourites!

This is a long and thin fish found on sandy bottoms, commonly seen with one-quarter of their bodies vertically extended out of the burrow. As the name suggest, garden eels often form large colonies up to several hundred individuals. We have these at our house reef! This small fish feed on zooplankton, the tiny animals in the water, and you can see the colony facing to the current and ‘dancing’ to pick as much as food they can.

When snorkeling on a coral reef, people don’t usually pay attention to the sand flat, so you may not see the garden eels. From a certain distance, you may see them coming up from the sand but they retreat back into their hole when approached. It is quite a challenge to get a close picture!

Can you see the spotted garden eels in the picture? How many can you count? 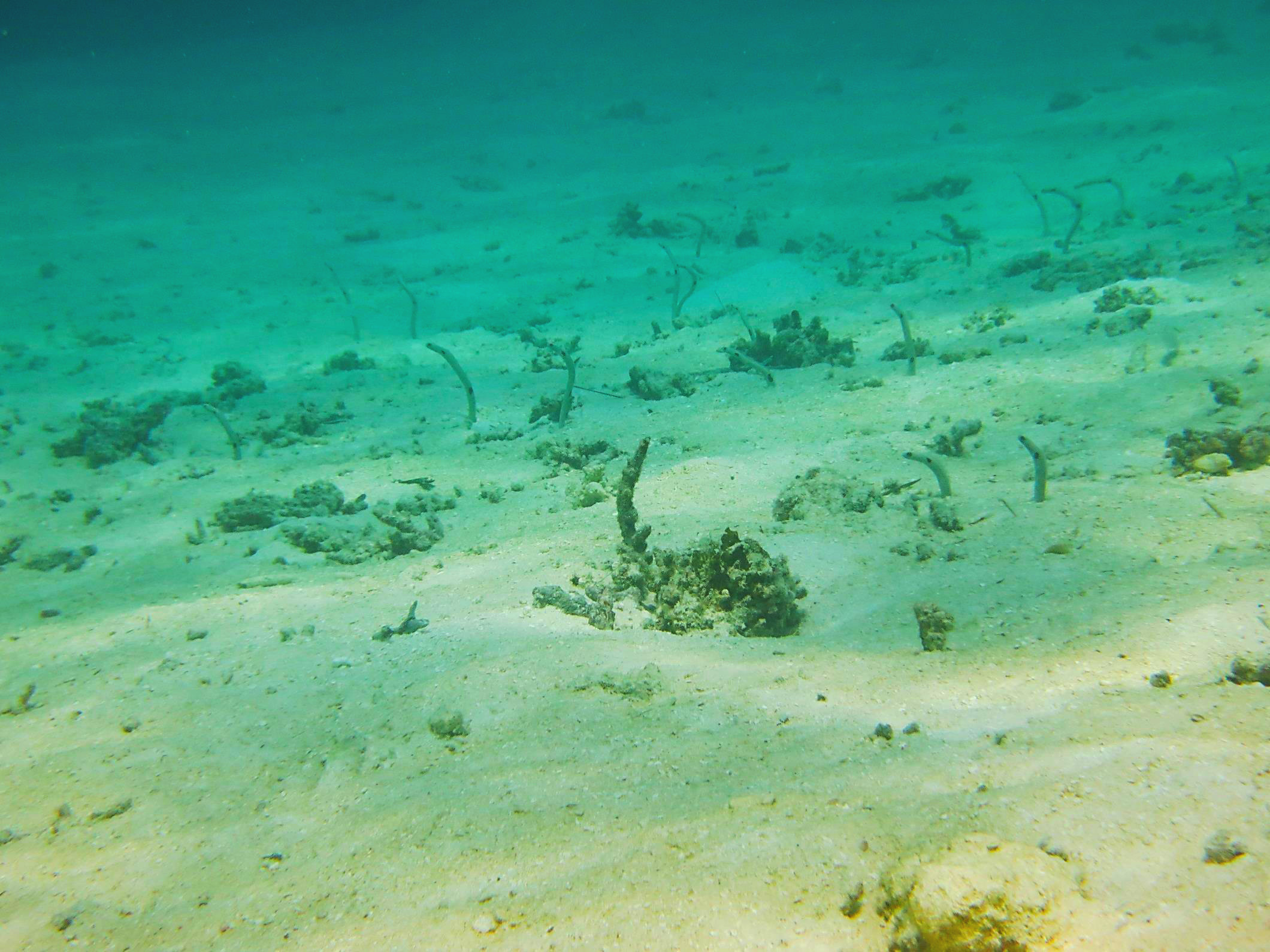 A very popular fish after the movie Nemo (although this one is not the real Nemo species), this is a small and colourful fish. They are really common in most of the coral reefs and always associated to one sea anemone. As all the anemonefish (or clownfish) family, they are adapted to live in a symbiotic mutualism with sea anemones. The sea anemone protects the fish from predators and provides some food; in return the fish defends the anemone from its predators and parasites.

They are rarely found very far away from an anemone. In one anemone you will find them in pairs or in a family group. This anemonefish has a beautiful black and yellow color body with two main white stripes. 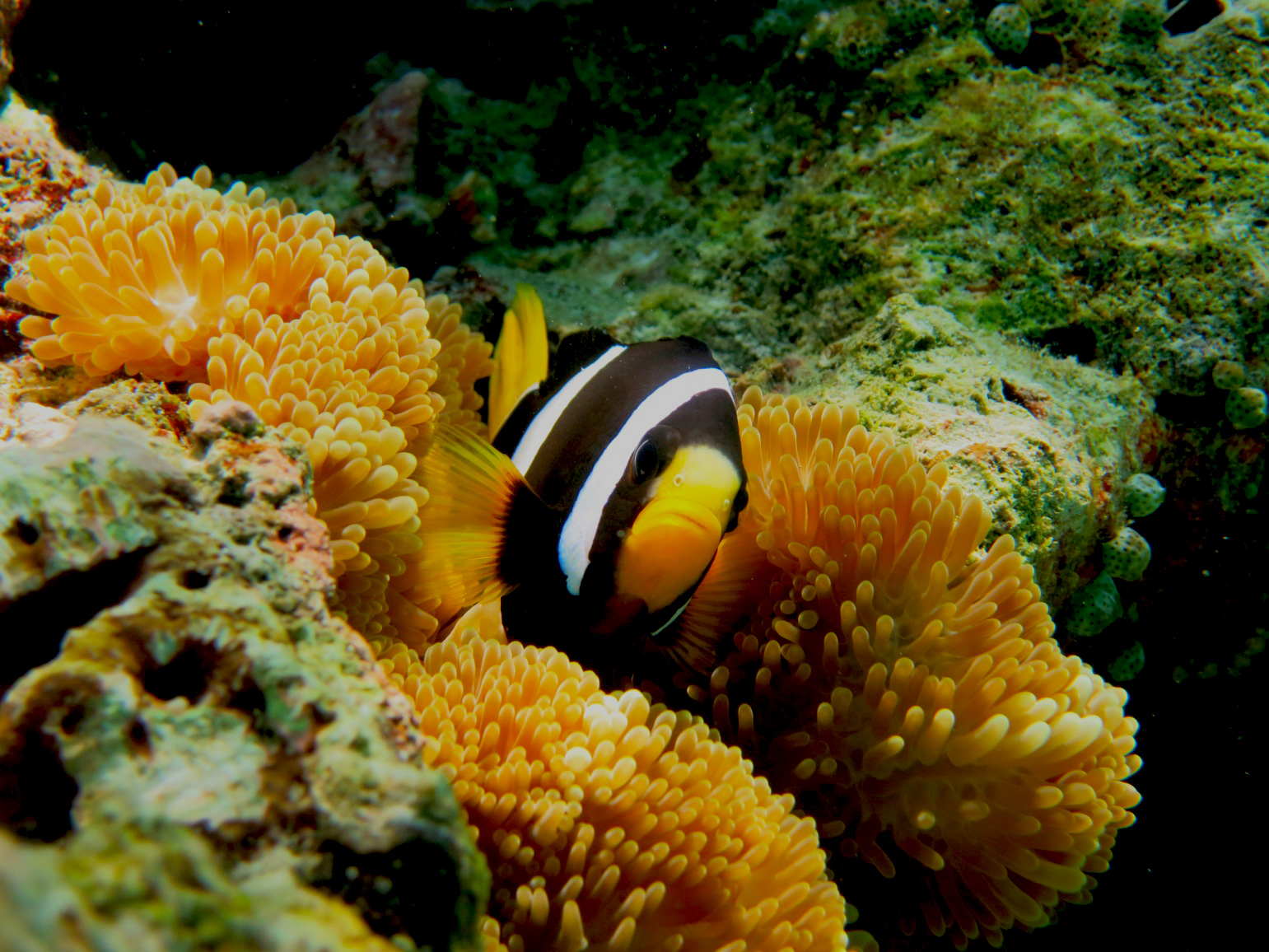 Pipefish are small peculiar fish similar to seahorses but with an elongated thin body. The peculiarities are the jaws, which are fused, and the tubular snout ending in a small mouth without teeth. The body of the pipefish is really flexible and allows them to get into tiny spaces in the corals. With a very small dorsal fin, they are not good swimmers.

They are masters of camouflage though! It can be a challenge to spot them on the coral reef. I didn’t know we had them in our house reef and the first time I encountered one, I got so excited! The most fascinating feature is that the male gets pregnant! The male fertilises the eggs from the female and incubates the eggs into a pouch until the young are released. 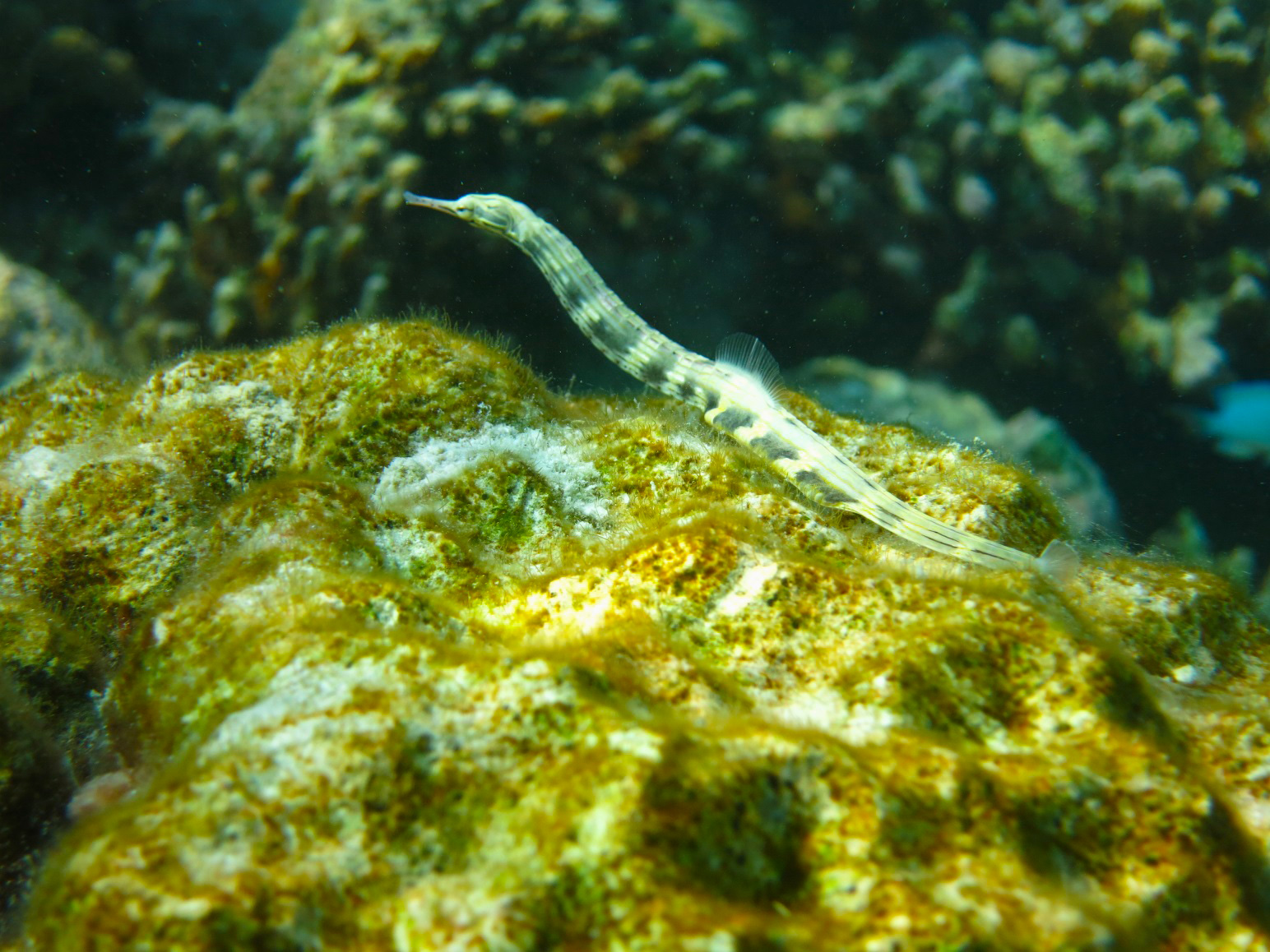 The Porcupine is a shy reef-associated fish. I find it the cutest fish in the reef with its very big eyes and small mouth pointing forward like it’s ready to kiss you any minute!

The body is covered by spines that normally lay flat, but when the Porcupine inflates itself by swallowing water the spines stand-up and the whole fish is like a prickly ball. They only do that in case of danger and it makes them to consume a lot of energy, so they shouldn’t be chased or disturbed to see how they become bigger. They are poisonous fish as they concentrate some toxins in their body. Make sure you don’t eat one of these!