When I first started working at Coco Bodu Hithi last year, I was certain that a day would come where I would have to deal with a sea turtle rescue, as sadly these animals are the common victims of entanglement here in the Maldives.
On the 24th of March I received an unexpected phone call from the watersports team, informing me that they had found a sea turtle entangled in a ghost net adrift off the shores of our nearby sandbank. As they were already approaching the resort, I sprinted to the beach to receive the turtle. I was surprised by the sight of a massive, very feisty female Olive Ridley Turtle that had both its front flippers deeply entangled in a mess of thin nylon thread carrying an old sandbag and a thick rope along with it. The turtle was big and strong but as I carefully cut her free from the fishing line strangling her, it was revealed that she had deep cuts around the soft flesh of her frontal limbs. Luckily, they still appeared to be functional as she was fiercely fighting to break free of my firm grip. 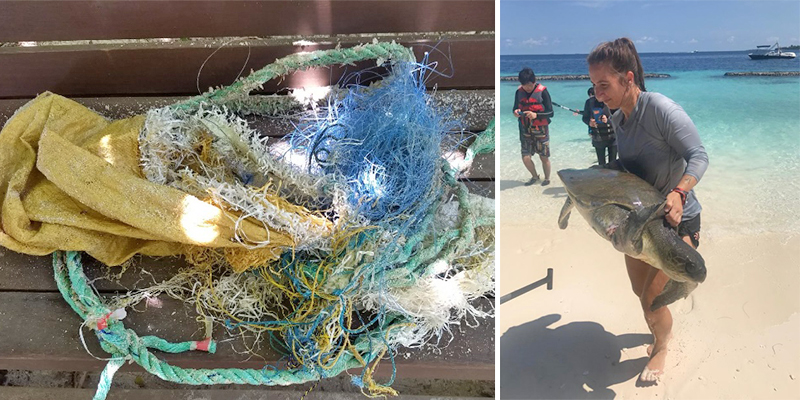 We proceeded to take carapace measurements and ID shots of both sides of the head, as well as pictures of the wounds to send to our veterinary surgeon based at Coco Palm Dhuni Kolhu for evaluation, who further instructed me to send the turtle to a rescue facility close by to monitor the wounds for possible infections and/ or loss of function. 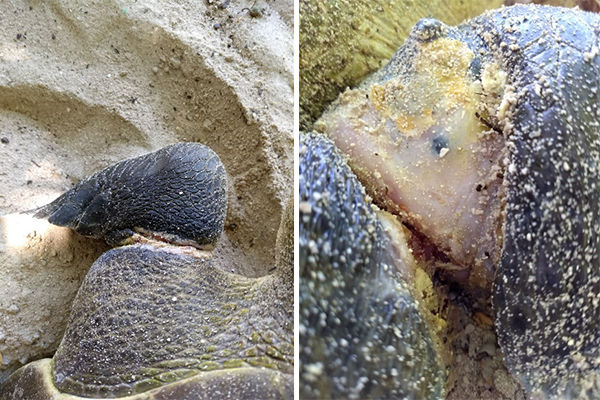 The cuts around the left and right front flippers

With the help of some concerned guests and our watersports team, we arranged a large enough container for the turtle to stay in and wrapped her in soaked towels to keep her protected from dehydration until she could be transported. As sea turtles breathe air, they can survive out of the water for several hours. The main risk they face is dehydration or stress from heat exposure. I gave her a quick shower every 15 to 30 minutes and tried to shield her from any further stress sources so she could finally calm down a little bit. We arranged a transfer for her to the Marine Savers Centre nearby for further monitoring. Before starting that journey I took her out for a refreshing swim around our shallow water lagoon, where she was visibly more comfortable than in dark confinement and was energetically kicking against my thigh. Her energy and strength were indicators that she was otherwise in good health and must not have been entangled for too long, which means that she was luckier than most other sea turtles that suffer from the same fate. The bruises she left on my leg, however, will probably take longer to heal than her wounds!

Ghost nets are nets that are discarded or lost at sea, drifting aimlessly with the currents. Animals such as Olive Ridley Turtles, which venture on long migrations through the Pacific Ocean, can easily get entangled in and, unable to free themselves or dive down to feed, are likely to suffer severe injuries, illness or even death. Some lucky ones get picked up to be rescued and rehabilitated. An estimated 87% of sea turtles that are found entangled in ghost nets in the Maldives are Olive Ridley, nearly all females presumably on their way to their nesting sites. The dangers and consequences of commercial fishing are multi-faceted and heavily affect marine wildlife in almost every corner of the world and in many places managing your way through the ocean unharmed has become quite the obstacle ride. It is important for us to make sustainable choices in every aspect of our lives, from managing our plastic consumption and disposal, keeping an eye on our carbon footprint to making conscious consumer choices when buying certain products like fish and seafood. Our collective choices will help make the ocean and our environment a safer and more livable space for turtles like “Vicky” (I baptized my rescue turtle)! 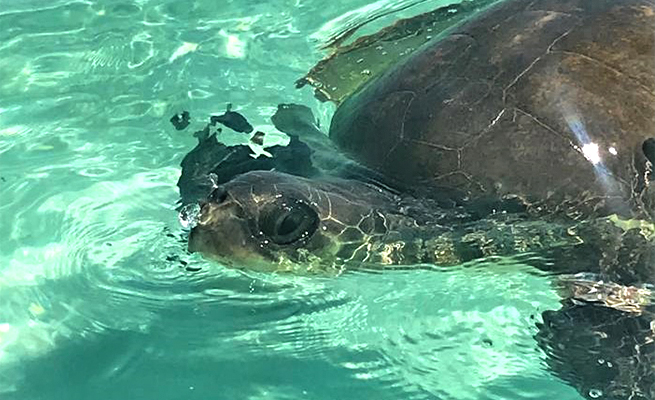