The Call of the Kanbili 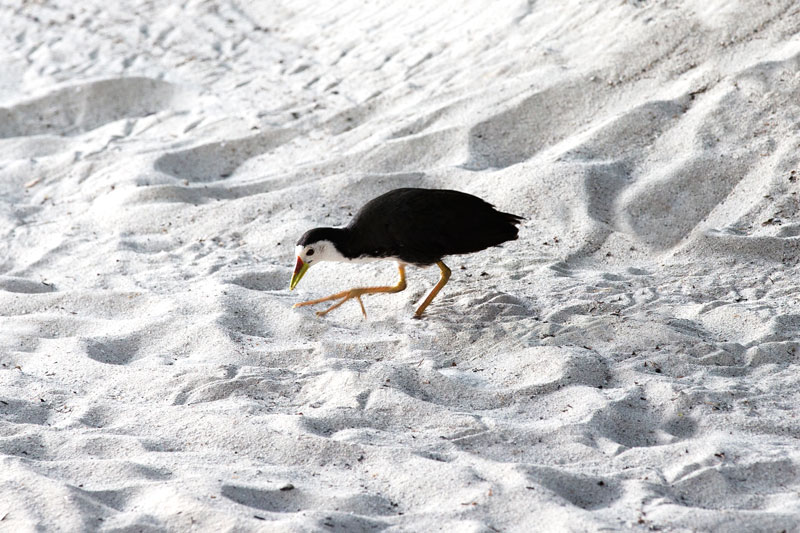 "It began with loud harsh roars which might have been elicited from a bear by roasting it slowly over a large fire, then suddenly changed to a clear note repeated like the coo of a dove." – Eha (Edward Hamilton Aitken)

The White-Breasted Waterhen, locally known as Kanbili, is a bird found in abundance across the Maldives, and they certainly like to make their boisterous presence known.

The waterhen is a small bird with dark slate-grey colouring, and a whitish face, neck, and breast. Their lower belly and undertail are brushed with a reddish-brown cinnamon colour, contrasting with their yellow legs and bill. Waterhens usually live in freshwater marshes; however, local Maldivian kanbili live and nest amongst the dense undergrowth and foliage in the centre of the islands.

Often heard before they are spotted, waterhens are very vocal during the breeding season, especially at dawn and dusk. Their calls are extremely unique and difficult to describe, although noted humourist Eha gave it a try as demonstrated above.

Visitors to our islands often take note of these funny little birds and have spotted them chasing one another across the pathways of the island or pecking at the ground for insects to feed on.

While waterhens do tend to keep to themselves, don’t be surprised if you come across a kanbili or two making ungainly tracks across the sandy floors of the bar.